You are here: Home › Just As We Told You, The ‘Super Battery’ Is Now Here 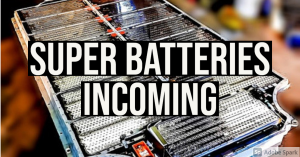 One of the trends we identified at Shoebat.com was the emergence of ‘super batteries’, mostly coming from the AI and technology sector that seem to overlap with military research projects. Our assessment was that given the rise of robotics and drones as tools of war, even to the replacement of the common soldier, they would need special batteries that could last for and extraordinarily long time and be able to perform under difficult conditions.

The Wall Street Journal reports that it seems our assessment is coming true, as ‘super batteries’ are taking a more serious role in modern life, primarily (and rather naturally) in autos first.

The rise of rechargeable batteries is now a matter of national security and industrial policy. Control of the minerals and manufacturing processes needed to make lithium-ion batteries is the 21st-century version of oil security.

The flow of batteries is currently dominated by Asian countries and companies. Nearly 65% of lithium-ion batteries come from China. By comparison, no single country produces more than 20% of global crude oil output.

Companies are working on new configurations—such as solid-state batteries, which don’t transfer ions through liquid—that could significantly enhance the power and further lower battery prices. The value of such a breakthrough could be measured in the billions of dollars, if not trillions.

“There’s still a huge amount of innovation to come,” says Christina Lampe-Onnerud, chief executive at Connecticut-based battery startup Cadenza Innovation Inc. Her company envisions that buildings could someday have their own batteries, giving them reserves of electricity they could use during peak hours to reduce costs. (source)

The battery trend is an issue of national security policy. It is not going away, and any developments in it should be treated similar to a major military-industrial corporation such as Raytheon (for the US) or Rheinmetall (for Germany).

It is natural that batteries would be tested in cars first- they are subjected to lots of abuse for long time under difficult conditions, and problems would immediately show themselves. While I cannot definitively prove it, such a thing leads one to question the role of military-industrial complex research and Elon Musk’s infamous “Tesla” car corporation, which became famous for not just having the first of such batteries, but having them continually catch on fire and the company lose money every year but somehow manage to remain in business and Musk to continue to amass a giant fortune. Economic realities do not seem to line up at all, and given situations such as this, it is not only not unreasonable, but one must wonder if his ‘company’ was but a possible front for research, development, and testing of such batteries and that the real source of funding that kept the company afloat has been the taxpayer without his knowledge.

But this is not to wonder about Tesla, but rather, to say that the battery is going to be very important in the future, and as battery technology develops, it has the potential to greatly transform how men live and more importantly, how wars are fought.

He Said It- Tom Brady Is So Successful Because His Wife Is A Witch
Islamic Terrorists Behead Ten People. They Take An Elderly Man And Slice His Head Completely Off As Part Of Public Execution
Follow