You are here: Home › He Said It- Tom Brady Is So Successful Because His Wife Is A Witch 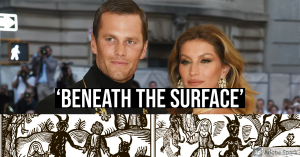 The Superbowl pulled in significantly below average ratings, which is part of a trend that is expected to continue due to generational shifts in entertainment tastes. But many still watched, and one of the noted comments from many is the performance of football star Tom Brady, who showed himself to be very successful on the field, and many have continued to wonder ‘how does he do it?’

The New York Post, for example, published an article showing his ‘schedule’ for training and eating, and it reminds me of those “ultra manliness” speeches from “men” such as Jocko Willink, Joe Rogan, Tim Kennedy, or Jack Donovan that portray a “real man” as one who gets up early in the morning and does a bunch of things all day with near perfection, and those men who “cannot” do such things are just “weak”.

When Brady in 2002 won the first of his record six ­Super Bowls, George W. Bush was president, Justin Timberlake was still a member of NSYNC, and Chiefs MVP quarterback Patrick Mahomes was 6 years old.

But nearly two decades later, Brady is still there, doing what he does better than pretty much anyone else — at a remarkable 43 years old.

Here’s how he does it.

It’s been said that trainer Alex Guerrero knows Tom Brady’s body better than the QB’s wife, Gisele Bündchen. As well as being his business partner in the TB12 health-and-wellness brand — including a chain of fitness centers that they plan to expand across the US — Guerrero has been described by Brady as his “body engineer.” (source)

However, and it was Brady who said this in 2019, he attributes his success to his supermodel wife, Gisele Bundchen, who he says is a witch who works magic spells for him.

According to the 41-year-old quarterback, the other equally important part of the equation is the pregame rituals that his wife, Gisele Bundchen, has him go through. In the days after the Patriots’ 13-3 Super Bowl win over the Rams, Brady described some of those rituals.

First, Brady noted that Gisele makes an ‘altar’ for him at every game.

“I’ve learned a lot from my wife over the years,” Brady said. “She’s so about the power of intention, and believing things that are really going to happen and she always makes a little altar for me at the game, because she just wills it so much. So she put together a little altar for me that I could bring with pictures of my kids.”

Brady is a father of three, so the fact that he has pictures of his kids isn’t really that surprising. However, Brady does have a few pregame rituals with his wife that probably won’t be copied any time soon by any other NFL player with their spouse.

“I have these little special stones and healing stones and protection stones and she has me wear a necklace and take these drops she makes and say all these mantras,” Brady said.

If you’re starting to think that this sounds kind of crazy, Brady actually had the same thought when this all started.

“At first, I was like, ‘this is kind of crazy,'” Brady said. “And then, about four years ago, we were playing the Seahawks and she said ‘You better listen to me: This is your year, but this is all the things you’re going to have to do to win,’ and I did all those things, and by God, you know, it worked.”

Thanks to that 28-24 win over the Seahawks in Super Bowl XLIX, Brady is now completely on board with all of Gisele’s pregame rituals, even if they are a little bizarre.

“I stopped questioning her a long time ago,” Brady said. “I just shut up and listen.”

Apparently, Gisele has an uncanny ability to see the future. Not only did she tell Brady that 2014 would be his year, but she also predicted that the Patriots wouldn’t win the Super Bowl in 2015.

Of course, the Patriots ended up winning the Super Bowl during the 2016 season when they came back from a 28-3 deficit to beat the Falcons 34-28 in Super Bowl LI. Gisele might want to start her prognostication website, because apparently, she’s getting really good at these predictions.

After the Patriots win over the Rams in Super Bowl LIII, Gisele let Brady know how lucky he was to marry a ‘witch.’

I didn’t say this. Brady himself said this, and CBS News reported on it.

I am pointing this out to bring a “reality check” to people about the nature of how some become become “successful” in the world. Certainly, there are many people who are industrious, work hard, and put a lot of effort for a long time into something in order to get what they want. These people are to be commended, and many times, but not always, they can become successful in their field.

It is also a well-known fact throughout human history history that witchcraft has been practices, and it too is real. The Church forbids its practice for the same reason that Kabbalism is the basis of so much witchcraft, including almost all modern European witchcraft, because it is an attempt to take the place of God and control things of which are not man’s place to control.

Sometimes people “blame God” because they fail, when often times it is because of their personal problems. This is by far the majority of cases. However, sometimes people fail because, possibly, God either allows or wants them to fail, and because the failure is not because of personal shortcomings, but because the result of the failure would give a greater and lasting good to that same person, as God always acts on that which is good and with purpose.

At the same time, we can also say from this logic that some people who are “successful” are only so externally, but internally are failures because they are or were not meant to succeed in something, but they did by attempting to short-circuit the rules that God has established in order to benefit themselves.

Likewise, it does not matter that Brady and Bundchen are supposedly Catholic, because witchcraft is NOT Catholic and is directly opposed to the faith that they claim to espouse.

So when one looks at the supposedly “successful”, a question to ask after a thorough self-examination (as most problems are self-generated), is if one has considered truly and deeply all possibilities, that one’s ‘success’ may be as a result of unnatural assistance, such as with the preternatural.

Likewise, those who see men or hear of those who are lauded to be ‘supermen’ should not feel despondent or disappointed in themselves, since there is no such thing as a ‘superman’, and if a man is promoting or is promoted as such, then it might be that he either has something he wants to sell you and is trying to manipulate you, or is abusing the laws of God and nature for his own benefit to enhance his appearance in the sight of men, or both.

Again, I want to be very clear that one should not try to blame problems on other people or circumstances, but that there is more to life than what one just sees, and that not all failures are bad, nor are all successes good, and that it is for man to keep in mind the purpose of his existence and his final destination, which is either his separation from God or his union in everlasting happiness with Him.