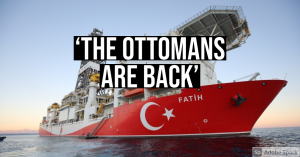 The regions from the Black Sea to the Caspian Sea and the surrounding parts are some of the most oil-rich areas in the world and have been for centuries. According to World Oil from Bloomberg, the Turkish government is considering making a multi-billion dollar investment into Black Sea oil production.

Turkey’s state-owned oil and gas company is considering partnerships and plans to raise funding this year to carry out work on the biggest natural gas discovery in the Black Sea, according to people with knowledge of the matter.

Turkish Petroleum Corp. has made preliminary contact with several international oil firms, including some of the majors, to jointly produce gas from the offshore field, said the people, who asked not to be identified because deliberations are confidential. The negotiations may not result in any ventures and the Ankara-based company may still go it alone, they said.

The necessary capital investment to produce the gas and deliver it onshore is estimated to be around $3.2 billion, one of the people said. Turkish Petroleum, also known as TPAO, was allocated 13.4 billion liras ($1.9 billion) from the government’s 2021 budget. It isn’t clear how much of that will be earmarked for the Black Sea gas project.

The project to develop the Sakarya field will see gas extracted from wells about 175 kilometers (109 miles) off Turkey’s Zonguldak coast. These could produce more than eight times the country’s demand and end its reliance on imports.

An added complication for the Turkish company is the threat of sanctions over Turkey’s intermittent seismic work in disputed waters in the eastern Mediterranean Sea.

Wary of punitive action by the European Union and possibly others, Turkey has recently brought energy affiliates based overseas back into its jurisdiction. It has also made a point of using state-owned vessels for exploration and production activities offshore. (source)

Oil access is critical to any nation if it wants to become a world power, since the petroleum powers the machines in a variety of way s that are necessary to run an empire. Turkey has made consistent efforts towards expanding her oil production capabilities and pushing them in a way similar to how the US and other empires in Europe have done.

Some might say that the Ottoman Empire is coming back. In Turkey’s mind, she is already back, but just has not made her official debut. She is securing the systems she needs in order to do this, and has made swift progress. The trend of Turkish investment in oil, gas, weapons, and heavy industry is going to continue, and grow in the coming years providing trends stay consistent in the region. It wil lbe interesting to see how the US and other nations respond to this, considering the long-standing Turkish alliance with many of the NATO powers.

Massacre In Mexico: Migrants Murdered And Their Bodies Charred And Burned, And It Turns Out That Members Of Mexican Police Took Part In The Killings
The White House And Federal Reserve Numbers Don’t Lie- COVID Annihilates The Economy
Follow