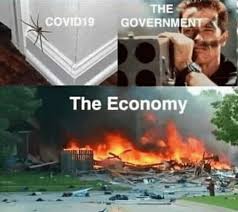 One of the very serious points that I have continually emphasized on Shoebat.com is the process of economic annihilation that is taking place where two classes are being formed- a small, wealthy overclass, and a majority poor underclass of people who have largely been stripped of any money and hope for making a better life for themselves, possibly for several generations. This is not a joke, it is far worse than the Great Depression, and it will endure for a longer time as its effects are concerned.

The White House recently put out a press statement saying, noting the concerns that Shoebat.com has raised, that millions of jobs have and will be- emphasis on the future -lost this year due to the effects of COVID on economic life.

In addition to CBO’s macroeconomic estimates of when the economy will return to pre-pandemic employment and growth trends, the current crisis is generating deeply inequitable outcomes for American families. Almost a year into the pandemic, almost 11 million workers remain unemployed and around 4 million have been unemployed for six months or longer. More than 2 million women have left the labor force, many in the wake of school closures and challenges with child care. These job losses have been concentrated among lower wage workers.

In addition, more than 15 million adults are behind on rental payments, nearly 24 million adults — and as many as 12 million children — are struggling with food insecurity, and more than 80 million adults are having trouble covering usual household expenses. The COVID-19 pandemic and related economic crisis have brought tens of millions of Americans to the brink of financial ruin through no fault of their own. (source)

Bloomberg has reported similar numbers, backed up by data from the Federal Reserve Bank showing a minimum loss of 10 million jobs with many more to come.

I say these things because the future is not bright at all for the US. Again, I do not mean there is NO hope whatsoever. What I am saying is that the 2020s have had a bad start, and considering that the pandemic social changes with masks and business restrictions may last/be pushed out until about 2027, the decade will likely go down as a ‘lost decade’ in American and world history. Wealth will be lost, opportunities (and lives) destroyed, and people will be pushed to their breaking point. Hence, it is no surprise why we at Shoebat.com have assessed that this decade will be a decade of radicalization, since desperate people seek desperate solutions, and the effects are magnified in individuals when whole societies are concerned. It is one issue if a few families are in dire poverty- those have always existed throughout history -but when those numbers go into the millions or tens of millions, and perhaps hundreds of millions, then the conditions are set for an upheaval of the current social order.

This is why there is going to be a third round of “stimulus checks”. And a fourth, fifth, sixth, and possibly a UBI. Watch for all of them, because they WILL happen, because they HAVE to happen lest the severity of the current crisis be exposed.

The US economy should have drastically collapsed around 2007-2008, along with the world economy. This process would have been very severe, with a lot of social and political consequences, but it would have enabled the US dollar to naturally collapse, reissued as a new dollar, and for the economy to go through about a five to ten year deflationary depression before making a full and natural recovery. Such would have been the best for all save big money interests and war profiteers. However, politically speaking for all optics, and especially for monied businesses and war profiteers, the answer that was given, which was to subsidize private corporate debts while privatizing corporate gains, was chosen, thus causing dollar devaluation with a stock market rally, giving the appearance of wealth without actually having it.

Ten years ago, the government bailed out companies. Now she is bailing out all her citizens, like it or not, because she HAS to if the dollar is to remain stable for a while longer before naturally collapsing due to devaluation. At this point, nothing can be done except to watch the show and prepare for as long as possible before the system’s realities are forced to expose themselves.

It’s not about COVID. It’s not even about money or poverty. The situation right now is about the remaking of the world economic and political order that will eventually take its final form in the most common way that societies are reshaped in a major way, and that is through open conflict, possibly on a global scale. We are living through these times now, and for those who see, now is the time to get prepared to face a future where things may look significantly different, indeed, as different as it would be for a person who lived in Germany 1920 to Germany 1950.