You are here: Home › Violent Anger In Israel Against Ultra-Orthodox Grows Over COVID 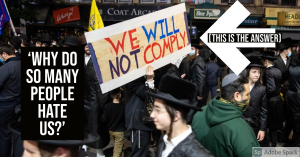 From the beginning of the COVID crisis, many ultra-orthodox Jewish communities around the world made a clear point that they were not interested and would not assist local or regional governments in following safety protocols to stop or slow the spread of COVID. Regardless of what one thinks or does not think of COVID, the fact is that many of such requests were made in good faith and applied to all people, but the disproportionate response of many among the ultra-orthodox coupled with whining about ‘persecution’ and “anti-semitism” has made many people of all backgrounds upset. After all, viruses do not discriminate by race or religion, and basic safety and sanitation and the consequences or lack thereof apply to all, and blatantly disregarding them for oneself and claiming special exemptions with no good reason to back up one’s claims, and then to try and destroy a man’s life by accusing him of racism or “hatred” is not a way to make friends, but to generate hatred due to one’s bad behavior.

As such, a lot of people became very upset with the behaviors and extreme responses of the ultra-orthodox. But it is not just non-Jews expressing this. Many Jewish people of all confessions were upset too, for the same reasons as the rest of the human race. In Israel, as The Washington Post reports, this has become a major problem, for not just anger, but open hatred from many Jews is exploding against the ultra-orthodox over their continued response to the COVID crisis.

“There has been a schism growing for a while, and the pandemic is making it wider,” said Tamar El-Or, an anthropology professor at Hebrew University and longtime scholar of ultra-Orthodox culture. “When this virus is gone, nothing is going to be same.”

The ultra-Orthodox — or Haredim as they are known in Hebrew — largely shun modern society. For decades, Israeli governments have accorded them autonomy in exchange for their leaders’ support in parliament and subsidized a lifestyle that favors Torah study over employment with welfare payments.

“It’s time that we have one law, for everyone,” said Yair Lapid, a leader of the parliamentary opposition, in a campaign ad contrasting a classroom empty during the lockdown with another filled with ultra-Orthodox students.

National elections are scheduled for March 23, and opponents have seized on the anger as a cudgel against Prime Minister Benjamin Netanyahu, who is blamed for not enforcing restrictions in a sector essential to his ruling coalition. (Just 2 percent of the fines issued last year for violating coronavirus restrictions were in ultra-Orthodox areas, according to Be Free Israel, a group advocating for religious pluralism.) Haredi parties, which often serve as kingmakers in the parliament, hold 16 seats. Polls, including one released in earlier this month by Channel 12 News, indicate 60 percent or more of all Israelis want ultra-Orthodox parties out of government.

In January, Defense Minister Benny Gantz proposed ending the ultra-Orthodox exemption from conscription, which is mandatory for other Israeli Jews. Academics and business leaders are renewing their calls for Haredi schools to teach basic math and science. Meantime, some secular lawmakers continue to target the per-child welfare payments that support large Haredi families.

Even within the community, tensions are emerging between hard-liners and others who have begun to seek education and careers outside their neighborhoods.

“You can’t ignore it anymore,” said Hila Lefkowitz, an ultra-Orthodox activist who is running for parliament as part of a new alternative religious party. “The way that the Haredi society functions, with its independence, now we are seeing the problems with that.” (source)

This is not just the only example. A lot of Israeli Jews- I speak specifically of the Jews here and not the Arabs -do not like the ultra-orthodox because many do not work and simply collect funds while they “study Torah” all day. While certainly there are men who are called to do such things, most are not, and the refusal of such large communities to demand nothing short of constant welfare from others while arguably contributing nothing to society makes people, who have to pay for their lifestyle, angry at them. It would be one thing if such people worked in jobs and were generally kind people to be around, but neither of such are things that the community is well known for, especially to other Jews.

This is about more than COVID. This is part of a long trend of anger against the ultra-orthodox, driven strictly by their own disordered behaviors that many choose to constantly indulge.

Given how the ultra-orthodox can become violent- Baruch Goldstein comes to mind -the behaviors of many of these people may inspire other Jews in Israel who are secular/nonreligious, reform, conservative, or even orthodox to take to physical violence against other Jews of ultra-orthodox sects based on the fact that they are tired of their behavior.

Many times one has heard about a “second holocaust” and people have wondered who it may come from. That said, a possible candidate may be from Jews against other Jews, and specifically, the majority of ‘average’ Jews against the strongly disliked ultra-orthodox group in Israel.

Is Central Africa On The Edge Of A Major Famine?
Massacre In Mexico: Migrants Murdered And Their Bodies Charred And Burned, And It Turns Out That Members Of Mexican Police Took Part In The Killings
Follow