You are here: Home › Is Central Africa On The Edge Of A Major Famine? 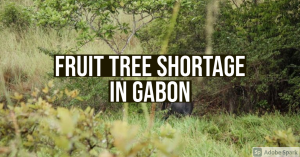 Currently there are four political crises and one environmental crisis taking place in Africa. In the Western Sahel region, fighting with Islamic troops has brought about population displacement has causes millions to spill over into Burkina Faso and Mali, potentially destabilizing those regions. In East Africa, there is the horrible crisis in Tigray, which has put millions of lives at risk and is in danger of provoking potentially direct NATO intervention. In north-central Africa, there is another ‘apocalyptic’ political crisis taking place causing many to flee to the Congo. In southeast Africa, fighting with Islamic terrorists in Mozambique has caused chaos threatening stability in the region. Finally, there has been an ongoing environmental crisis in southern Africa over water, threatening animals and humans alike.

But a story that has not made news yet has also caught my eye. It first appeared in Science magazine in December 2020, where it reported that fruit yields among the tree crops in Gabon, a small, oil-critical nation near the “crook” of Africa just sought of Cameroon and north of Congo on the Atlantic coast, could be a premonition of a potential food crisis.

This warning seems to be transpiring into something more, as AllAfrica reports now that the fruit yields are beginning to affect the animal populations.

The behaviour and life cycles of the largest animals on the planet are incredibly important for the healthy functioning of our planet’s life support systems. Unfortunately, many big species now face extinction due to their value in the illegal wildlife trade, vulnerability to habitat degradation and because they often come into conflict with humans.

The African tropics host many of these remaining megafauna or large animals like gorillas, elephants and hippos, but they are now losing ground. African forest elephants, for instance, have a population just 10% of their potential size, occupying 25% of their potential range.

In our recently published paper we analysed 32 years of valuable data about tree behaviour and found that – between 1986 and 2018 – there was a massive collapse in fruiting events.

This has resulted in a fruit famine and, based on a body condition score applied to archived photographs, an 11% decline in the physical condition of the elephants at our study area since 2008. (source)

As the paper notes, the conditions for this have been in formation for a long time. That said, it is interesting when one considers all of the current crises taking place in Africa, and how many people, given the new technologies and easier means of transportation, are simply choosing to flee their native lands. We saw this last time in 2015 and 2016 with the massive, government-encouraged migrations to Europe, which had the additional and serious effect of turning, in particular in Germany, what was massive support for refugees into a massive hatred for refugees coupled with a reignition of the fires of nationalism among the people.

Africa is on the edge of another potential refugee crisis. If it happens again, it may be much larger than the previous crisis. As with many things in life, it is never a single event, but a series of events that compound on each other and form one large, serious event that brings chaos.

If the animal populations are being affected in Africa because of low fruit tree yields, then it is inevitable that the human populations- who eat the same fruits- will be affected too.

It would not be a surprise, if the trends in building for decades now are coming to fruition, that in the next year, there could be an emerging food crisis in Gabon or her neighbors. If this happens, in combination with the current crises taking place, it could be one of, if not the very final, straw in pushing Africa into another population dispersion towards Europe, which will not make problems better, but only serve to accelerate the current trends of militarism and conflict that could spread to a worldwide scale.