You are here: Home › Major Late Protestant Evangelist Found To Have Been A Serial Sex Abuser 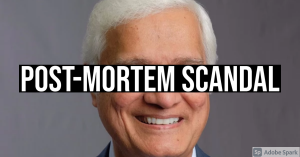 For years, Shoebat.com has reported based on the words of Billy Graham’s grandson, Boz Tchividjian, that there is a sexual abuse epidemic as bad and worse in Protestant churches than in the Catholic Church. In the case of the Catholic Churcha, while it is bad, the statistics from decades of studies clearly show that it is overwhelmingly (81%) a homosexual problem where this bloc of priests that constitutes no more that 4% of the Catholic hierarchy targets overwhelmingly (65%) teenage males. The Catholic Church, in spite of what priests or bishops who have heretical ideas may think, clearly on a dogmatic basis has an explicit condemnation of such behavior. Thus while people may choose evil, even a majority, it does not change truth, and eventually the Church will be sorted out properly. This was promised in Sacred Scripture, where the Church that St. Peter founded would be Christ’s Church against which the gates of hell would not prevail, and her history of major controveries, such as the Arian crisis, clearly bear out this fact.

The Protestant churches do not have this Scriptural blessing, and so not only are they vulnerable, but can look stronger before suffering a spectacular collapse or major revelation that is horribly scandalous. Such a kind of scandal is happening now as according to the Christian Post, the late and famed Protestant preacher and missionary Ravi Zacharias was found to have been a serial sex abuser even up to his death as a month-long third party investigation has uncovered.

Ravi Zacharias International Ministries issued an apology Thursday as it announced the results of a monthslong independent investigation in which victims claimed the late Christian apologist engaged in “sexting, unwanted touching, spiritual abuse, and rape” during his life.

In a statement accompanying the report, the board of RZIM said it was “shocked and grieved by Ravi’s actions” and feels “a deep need for corporate repentance.”

“We believe not only the women who made their allegations public but also additional women who had not previously made public allegations against Ravi but whose identities and stories were uncovered during the investigation,” the RZIM statement explains.

“Tragically, witnesses described encounters including sexting, unwanted touching, spiritual abuse, and rape. We are devastated by what the investigation has shown and are filled with sorrow for the women who were hurt by this terrible abuse.”

One massage therapist said the evangelist often tried for “more than a massage,” while four massage therapists said Zacharias masturbated or asked them to touch his genitals during massages.

Five said he “touched or rubbed them inappropriately.”

Another massage therapist “reported details of many encounters over a period of years that she described as rape,” according to the report.

“Only one of the witnesses we interviewed said that Mr. Zacharias engaged in sexual intercourse,” the report states. “This witness reported details of many encounters over a period of years that she described as rape. To protect her identity, this report does not disclose many of the details she shared with us.”

After Zacharias talked with her about her faith and finances, establishing himself as a “father figure,” he arranged for his ministry to provide her with financial support. However, he then demanded sex and “warned her not ever to speak out against him or she would be responsible for the ‘millions of souls’ whose salvation would be lost if his reputation was damaged.”

“A number of aspects of this account involved similar behavior and escalation as the accounts of other therapists who would not have known each other and who treated Mr. Zacharias in different contexts over time,” notes the report.

The investigation discovered that a collection of explicit photos — many of them of much younger women — were also found in Zacharias’ possession.

Romantic emails Zacharias sent to a woman in South Korea and a massage therapist in Thailand, whom he called his “angel,” were also uncovered.

“We also reviewed Mr. Zacharias’s electronic devices and found evidence of text-and email-based relationships with women who were not his wife, as well as over 200 ‘selfie’-style photographs of women,” the report reads. (source)

It is always unfortunate when things like this happen. It is not good to delight in the misfortune and problems of another man, especially about a matter as serious as the one in question here.

However, it is a fact that such things do happen. They are real and cannot be hidden, as they eventually will come out. What will happen to his ministry outfit left behind and possibly estates is yet to be decided, but the fact is that this is a major shakeup in the Protestant world, as many people trusted him and while he may have said good or noble things to people, that one’s words may not have aligned with said actions.

Ultimately, any ministry work is not about fame, power, or fortune, or ‘how many’ people one has ‘saved’, because the work is supposed to be for God and not man. As such, it is why there is a pattern of noting where sometimes the greatest people- including the most holy people -are often those who are known only to God. Saints are holy people whose lives are meant to inspire others as examples in virtue, or what one was to what one became, but there are far more that exist than those in the canonized registers.

I will not comment about the state of Zacharias now, as it is something known only to God. I will say that his situation, while unfortunate, is a reminder that one can say things that are good but not live them, and that it is always one’s actions that matter more than what one says.

Conflict Worsens In Tigray Amid Accusations Of Aid Cutoff, Mass Rapes
“Ottomans In Space” As Turkey Creates Her Own Space Program
Follow