You are here: Home › Conflict Worsens In Tigray Amid Accusations Of Aid Cutoff, Mass Rapes 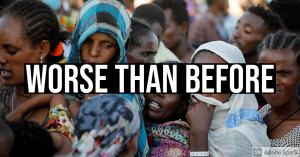 Although the fighting as subsided, France24 reports that a humanitarian catastrophe looms in East Africa in the northernmost region of Tigray in Ethiopia, as it says that amid aid cutoffs, millions of people are at risk of starvation.

The Ethiopian Red Cross said Wednesday that 80 percent of the country’s conflict-hit Tigray region was cut off from humanitarian assistance and warned tens of thousands could starve to death.

“Eighty percent of the Tigray is unreachable at this particular time,” the president of the Ethiopian Red Cross Society, Abera Tola, told a press conference.

Some starvation deaths have already been reported and the figures could climb fast, he said.

“The number today could be one, two or three, but you know after a month it means thousands. After two months it will be tens of thousands,” he said.

Abiy has said the military campaign in Tigray responded to TPLF-orchestrated attacks on federal army camps.

But humanitarian workers and diplomats say continued insecurity has hampered the aid response.

Displaced civilians who have managed to reach camps in Tigrayan towns are “emaciated”, he said.

“You see their skin is really on their bones. You don’t see any food in their body,” he said.

“Sometimes it is also really difficult to help them without some kind of high nutritional value foods.”

Additionally, the Washington Post reported this morning that Tigray has a series of mass rapes that happened.

The situation in Tigray is very bad, and it is getting worse. Here at Shoebat.com we have predicted that if conditions continue, there is a strong possibility that it could lead to a second and more serious migration crisis into the Middle East and Europe thus continuing the cycle of migration –> nationalism –> militarization that we have noted since 2016 at Shoebat.com.

A major trend to watch for will be possible military action in Tigray as part of a NATO collective. This is very serious because it has to do with Russian geopolitical influence in her historical ally/frenemy (“friend-enemy”) of Ethiopia, and with the attempt to assert European control over her former colonies, as less than a century ago Ethiopia, Eritrea, and Somalia were Italian, Djibouti was French, the surrounding nations save Chad were British and even Tanzania was German.

Since it has been made explicitly clear since 2009 that the European nations want to use major conflicts to reassert themselves again as imperial powers, the conflict in Tigray, which is a region has served as a NATO ally during the wars against the Russian-backed communist Derg that overthrew the neutral (as he was neither pro-NATO or pro-Soviet, but attempted to embrace and treat both sides well) monarch Haile Selassie, is an ideal situation to exploit. It also does not help that Eritrea, while poor, has angered European nations by refusing consistently to accept foreign aid, and in so doing is considered to be ‘rebellious’.

The situation in Tigray will have to be monitored very closely, as if the trends stay consistent, the next ‘big war’, but not a global conflict, that will define the Biden administration, similar to the wars in Afghanistan and Iraq for Bush, Obama, and Trump, will be intervention with NATO as a collective in Ethiopia and Eritrea.

MMT In Action As Us Budget Debts For 2021- Even Before BidenBux And KamalaKash -Hits $2.3 Trillion
Major Late Protestant Evangelist Found To Have Been A Serial Sex Abuser
Follow