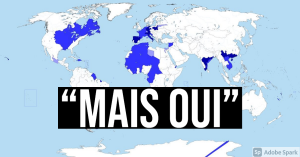 France24 news reports that amid growing tensions with China France has moved a nuclear submarine into and is now patrolling the South China Sea.

The week in France kicked off with a Twitter thread by Defence Minister Florence Parly revealing that French nuclear attack submarine SNA Emeraude was among two navy ships that recently conducted a patrol through the South China Sea.

“This extraordinary patrol has just completed a passage in the South China Sea. A striking proof of our French Navy’s capacity to deploy far away and for a long time together with our Australian, American and Japanese strategic partners,” she tweeted along with a picture of the two vessels at sea.

The SNA Emeraude, accompanied by a support vessel, set sail 15,000 km off the French coast as part of the Marianne mission which, since September 2020, has consisted of patrolling the Indo-Pacific zone to “show that we are still present there militarily”, said Jean-Vincent Brisset, research director at the Institute of International and Strategic Relations (Iris) and a China specialist, in an interview with FRANCE 24.

“It was an old promise made by Jean-Yves Le Drian when he was still defence minister,” explained Brisset. Le Drian, France’s current foreign minister, was defence minister from 2012 to 2017.

China lays claim to nearly all of the South China Sea while Taiwan, the Philippines, Brunei, Malaysia and Vietnam all also claim parts of the region, believed to hold valuable oil and gas deposits.

Beijing’s claims are disputed by the US and several European and Asian countries. The US mission to the UN last year formally submitted a note verbale — a diplomatic communication — to the UN Secretary-General’s office arguing that China’s maritime claims in the disputed South China Sea were “inconsistent with international law”. In January, Japan, a major Asian power, joined a growing list of countries, including the UK, France, Germany, Malaysia, Australia, Indonesia, Vietnam and the Philippines, in making similar submissions to the UN.

In this increasingly tense maritime geopolitical context, France wants to restate that it has its own interests to look out for in the region. In 2019, the French defence ministry released a policy report, “France and Security in the Indo-Pacific” recalling that around 1.5 million French nationals live between Djibouti in the Horn of Africa and the overseas territory of French Polynesia. This means that Paris views its Indo-Pacific zone as stretching from the Gulf of Aden to beyond Australia.

But the South China Sea was not included in the report. “From a legal point of view, it is perfectly acceptable for the French navy, in the context of its operations around the globe, to sail there,” noted Antoine Bondaz, a research fellow at the Foundation for Strategic Research and aa Asia specialist. (source)

Shoebat.com has been saying for years, reporting on the words of Bernard Connolly from the European Commission in 2009, that European nations want to get their empires back and rebuild themselves.

France is not a weak nation, unlike the “cheese eating surrender monkey” view of them that too many Americans still have. France has the fifth most powerful military in the world, the second most powerful navy, and is a major and heavily nuclear nation, with nuclear plants all over France, an as many have noted, the main reason for nuclear plants is not electricity, but to produce waste products that can be used in nuclear weaponry.

France also had a global empire. there are about 235 million first-language French speakers, and about 100 million second-language speakers. Note, however, that since France’s population is about 60 million, even if one includes areas such as Quebec, the number of actual “white Europeans who speak French is in the tens of millions, and definitely less than 100 million. Most of those first language speakers, and almost all of the second language speakers, are in France’s former colonies, which are mostly in Africa but also parts of Asia and South America. There are more “non-French” who speak French in the world than “native French”. It is after English (which has a similar phenomenon) truly a major global language.

Likewise, France also controls all of the currency for her former African colonies through the West African Franc and the Central African Franc by way of the Bank of France. All of her wealth comes not from goods she produces, but through the manipulation of currency and trade balances in Africa, and without Africa, she would be nothing. It is why she has an entire separate military group- the Foreign Legion -that exists just to protect here interests in the former colonies, because without their indirect influence, France is and has nothing, and is at the mercy of England and Germany.

France is looking, like the rest of Europe, to take a more direct role in political affairs. She is still technically a colonizer with her financial domination, but now is moving back toward political control.

Just note the highlighted part. She wants to control Indochina again, and with that, parts of China, similar to how China was carved up scarcely over a century ago by Western powers.

China knows this too, and why she is becoming more aggressive, and why they likelihood of a conflict is so much more real than it has ever been and is likely going to grow until it becomes and open fight.

It will be interesting, as a trend, to watch France’s behavior in Asia, China’s response, and the response of the US, since she has patrolled near said area in the Strait of Taiwan with France before, and also has her own interests to assert in the region.