You are here: Home › Evangelicals Most “Proud To Be American” 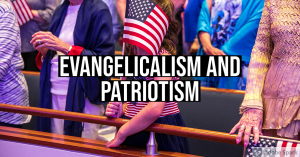 There is nothing wrong with being happy to be of a particular national identity. The house of God is filled with people from all countries and nations, so there is room for everyone. As we at Shoebat.com have pointed out, echoing the words of Popes Pius XI and Ven. Pius XII in Mit Brennender Sorge, such is not a problem except when national identity replaces the grace of God or theology as a virtue, either in whole, or by relegating the latter as subject to the former. This is one of the serious errors of Protestant sects, as the religion has been, since its inception and also as seen in movements throughout Christian history to the earliest days, outside of the Church, incline to the subjugation of the Church in favor of a national ethos.

Even among the Orthodox, this is a serious problem, because for all of the talk about being “universal” and the non-existent concept of “orthodox unity”, not only does the latter fly in the face of history as much as Protestantism’s claims do, but the Orthodox churches are explicitly nationalistic. To see this in action, just ask if one can be “[enter nationality here] Orthodox”, and while many will say “no” because of the cultural-race-tribe associations, the wise will say “yes”, and in that case, it begs the question as to not only which Church Christ founded, but to who is the final authority, and while said Churches are not more active around the world. The Catholic Church may be called “Roman”, but strictly as a place designation, for if the Catholic Church had to be associated with a race or culture, she would be overwhelmingly a dark-skinned man in Africa or Asia of one of such cultural designations, since that is where she is the strongest.

In the case of American Evangelicals, being that it is an extension of the, generally speaking, decrepit and dying Mainline Protestant churches (as the statistics all bear this out), retains much of the nationalistic and identity-based Christianity that became popular centuries ago starting with Luther and then King Henry VIII. For many of them, being a “good Christian” is synonymous with being a “good American” in a seamless division.

No religious group expresses greater pride in their national identity than white evangelical Protestants, with the majority saying they are very or extremely proud to be an American, according to a new survey.

More than four in 10 white Catholics (46%) and white mainline Protestants (43%) also report being extremely proud of their national identity.

Older Americans express much more pride in their nationality than do younger Americans: Seniors are more than twice as likely to say they are extremely proud to be American than are young adults (55% vs. 23%).

Overall, most Americans feel proud about their national identity, with more than six in 10 saying they are extremely proud (34%) or very proud (28%) to be an American.

A previous study found that evangelical Protestants are more likely than any other religious group to sympathize with and accept Christian nationalism, defined as a “cultural framework that idealizes and advocates a fusion of Christianity with American civic life,” with Christianity being more cultural and tribal than spiritual.

Christian leaders have repeatedly warned against Christian nationalism, particularly after individuals stormed the U.S. Capitol while carrying “JESUS 2020” signs and “In God We Trust” banners, and one enormous cross.

In an interview with The Christian Post, Samuel Perry, an associate professor at the University of Oklahoma and author of Taking America Back for God: Christian Nationalism in the United States, defined Christian nationalist ideology as one in which adherents want to “institutionalize our religious beliefs and values” and “view religion more as something that is like a cultural marker of identity.” (source)

The fact that “Christian nationalism”, which is not really Christian so much as it is American ethno-Protestant nationalism, is so popular is because the two concepts cannot really be divorced from each other. While religion and government always share a relationship, the Catholic Faith has always maintained that the two are not equal, the Church has the superior position, and that they are not dependent on each other. The Church has always fought this, and thus is never tied to any one government or system just as how she cannot be tied to any race or culture solely. This differs from many nations where kings, emperors, and presidents are able to and do interfere liberally in religious affairs as though the religion is formally subject to the state, which it is.

However, the fact is that religion never is dependent on a government. As people realize this, religion starts to pass away unless it exists outside of government, as one can be a good citizen, but not necessarily a good Christian.

Thus, from a trends view, expect this to be a part of the continual passing of American Protestantism and many other forms of Christianity. The Catholic Church will survive, but in a smaller form, and far less “nationalistic than she is now. Evangelicalism will exist too, but much smaller, and most likely have a greater presence in history books than in practical life.