You are here: Home › Again? He Who Believes Trump And The Republican Line At This Point Is Deluding Himself

By Andrew Bieszad on February 17, 2021 in Featured 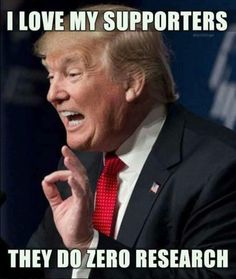 These were a lot of popular saying that made people happy and gave them hope, but never materialized into such things outside of political rallying for then-candidate Trump’s presidential campaign. As I have noted, Trump exploited real potential sentiments but then used them to advance his own ego, resulting in a lot of disappointment and anger, which clearly helped contribute to his loss. One may not like the Democrats, but to their credit, they do at least make clear attempts to institute their ideas, good or bad when in power. The same statement cannot be made about the Republicans, who upon taking power LARP as “Democrat-lite” but do nothing except complain.

An evangelical former Trump cabinet member has launched a new think tank designed to advance the “America First” principles popularized in the previous administration and seeks to “restore an American consensus of a nation under God.”

Russell Vought, the former director of the White House Office of Management and Budget under former President Donald Trump, announced the creation of the Center for American Restoration late last month.

According to Vought, the Center for American Restoration will “help restore an old consensus in America that has been forgotten, that we are a people For God, For Country, and For Community.”

Vought remarked that “notwithstanding policy victories on taxes, welfare, and the right to life in the last several decades, the tide of progressive liberalism has not been turned.”

“The Center for American Restoration exists to provide that footing,” he wrote. “Its mission statement is to restore an American consensus of a nation under God with unique interests worthy of defending that flow from its people, institutions and history, where individuals’ enjoyment of freedom is predicated on just laws and healthy communities.”

Vought, who was questioned about his evangelical beliefs by Sen. Bernie Sanders during a 2017 confirmation hearing, decried liberals’ control of “the commanding heights of culture.”

He said those heights include “the academy, the media, [and] the entertainment industry.” He described the Trump presidency as “the first real counter assault to the left in decades.”

The Center for American Restoration’s overarching theme is that “the counter-assault” against the political left that began with the Trump presidency must not come to an end even though he has left office.

“We hope to give voice to the common, forgotten men and women across this great country, possessed with extraordinary intuition, who work hard, pay their taxes, and attempt to raise their families in healthy communities,” he maintained.

According to Vought, it is important to remember that “we’re a country under God.”

“We were created to honor God, to be for God,” he told CP. “And to the extent that we are, that it impacts our happiness [and] our satisfaction in life. That should be a part of what we align public policy with.” (source)

Stop for a minute.

Do you really believe this clap-trap?

Trump had four years to do what he said. He was president of the most powerful nation in the world, and what did he do? Where is the wall? Where are the investigations of real criminal actions? Where are the brave, selfless patriots that “QAnon” bragged about and just pacified the massed by repeating “TRUST THE PLAN” and “PATRIOTS ARE IN CONTROL”?

I don’t know where “QAnon” is, but I can guess he’s now working on his next assignment to hoodwink the gullible American public, and especially the right wing, who seeks out messiahs in men but then finds they have found only too late a false prophet.

Trump lied to you. Forget the insane talking points of some on the political left that objectively are unbalanced, manipulative, or abusive. Stick strictly with Trump’s words versus his actions and his responses that he directly had control over- because unlike what Trump portrayed as an image, he and his party had a lot more control over the path they could have taken the nation down if they cared to but simply did not, and they could have done it without real effects from the Democrats other than their screaming.

If one looks at it this way, then there is no denying that Trump pathologically lied to the public to get power and really reinforce his own image and ego while he did not a single thing for the common man who so begged him for help and showed his support with his vote.

I’m not criticizing Trump’s policies, or those of the people who voted for him, or taking any sides. I am saying that if you look at Trump, he was a horrendous liar who manipulated and abused his own base right to their face, and the facts bear this out consistently.

Since we know this, the next natural question is, why would such a person want to support the same man who mistreated him? If patterns remain true, the natural answer is that Trump is going to do the same things again if given a chance.

You say Trump needs another chance? He had four years to prove himself as the leader of the most powerful nation in the world, with all resources at his disposal. What justifies trusting him again?

Trump is trouble, and people would be wise to ditch his image and run, and focus on remaking the Republican party along a platform that they can distinguish themselves with and return to power. However, as long as the Boomers- the largest bloc supporting Trumpism -is around, it seems that Trumpism is going to continue to exist, and instead of being seen as who he is based on what he did, the image of Trump as a ‘martyr’ by the ‘evil democrats’ will continue, and the feeding between the left and right grow as long as people continue to play the partisan political charade game that controls and distracts the masses from the real cheating that is being pulled on them.

If you want to change the political system, it always begins with individuals, and sometimes, in a system as rigged and dishonest as that in contemporary society, the best way to win is not to play at all, and go against both.

Dump the old brand, and bring in a new and better one, lest one is duped and then disappointed again.

Uzbekistan Breaks With Cyrillic, Moves Language Fully To Latin Script By 2023
End Of An Era: Rush Limbaugh Dead At 70
Follow