You are here: Home › Uzbekistan Breaks With Cyrillic, Moves Language Fully To Latin Script By 2023 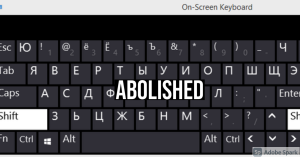 Language is a powerful thing. It shapes who we are, how we see the world, and the values we hold. In the Western world, the Latin alphabet of the Romans served both political and religious purposes for the Church and national governments or later, empires and their territories. The same can be said about the Cyrillic alphabet for the Slavic nations, with the most influential being Russia and her expansions into Siberia. The Arabic script was used to bring Islam to the Ottomans (as prior to the 20th century Arabic script donminated), Persians, Indians (Urdu), and other races in Central Asia or even Africa. Thus, a change in language, even alphabet, can be a political act.

Right now, there is a major battle being fought over control of Central Asia. He who controls that area always has, but in the future may decide the outcome of a major global conflict. Decades ago after the fall of the USSR, it was already controversial that some nations, such as Turkmenistan, switched from Cyrillic to Latin script for writing their language for this reason. Now the second-most powerful nation in Central Asia after Kazakhstan, Uzbekistan, is switching from Cyrillic to Latin for her script by 2023.

Uzbekistan plans to fully transition the Uzbek language from the Cyrillic script to a Latin-based alphabet by January 1, 2023.

The Justice Ministry said in a statement on February 11 that the government approved the target date and a corresponding road map for the plan a day earlier.

The government’s decision comes less than four months after President Shavkat Mirziyoev issued a decree to expedite the full transition of the Uzbek language to a Latin-based alphabet.

Uzbek, as well as other Central Asian languages, was written in an Arabic script until the late 1920s. It then switched to Latin script as part of a larger Latinization of Turkic languages, before the Soviets introduced Cyrillic in 1940.

In 1993, less than two years after the collapse of the Soviet Union, Uzbekistan began to transition back to a Latin script but Cyrillic is still widely used.

After going through various iterations, a working group at Tashkent State University presented a final draft of the updated Uzbek alphabet based on the Latin alphabet in 2019.

The updated alphabet consists of 30 characters: 29 letters and an apostrophe to denote a hard sign, specific sounds, or intonations..

In neighboring Kazakhstan, the process of switching to the Latin alphabet has been going on since 2017, when former President Nursultan Nazarbaev first instructed the government to work on the transition to a Latin-based alphabet by 2025.

Another Central Asian country, Turkmenistan, switched from the Cyrillic script to Latin in 1993, while Azerbaijan, a Turkic-speaking former Soviet republic in the South Caucasus, replaced its Cyrillic-based alphabet with the current Latin-based script on December 25, 1991.

The move to shift to Latin script was in part driven by political considerations, in order to distance the Turkic-speaking nations from years of Russian influence and develop a stronger national identity in the young states. The Latin script is also considered better suited to Turkic languages.

The Soviet-era transition of Turkic languages to Cyrillic was in part implemented to distance Central Asian states and Azerbaijan from Turkey, which as part of a Westernization drive changed its Persian-Arabic script to a Latin one in the 1920s. (source)

This is happening at the same time that US and NATO influence has significantly grown in Kyrgyzstan, as all the nations are moving closer to Turkey, and they all are building deeper economic ties with the West as Russia struggles to keep them in her sphere of influence.

A major trend to watch will be ‘westernization’, in the full sense of good and bad with a “liberal’ model, become more popular, as it is political and related to military control over that region that could lead to the breakup of Russia from Siberia, isolating her to the lands west of the Urals, and creating a Siberia ripe for new nations and exploitation by the US and other imperial powers.

Texas, The Winter Storm, And Thinking Ahead
Again? He Who Believes Trump And The Republican Line At This Point Is Deluding Himself
Follow