You are here: Home › End Of An Era: Rush Limbaugh Dead At 70 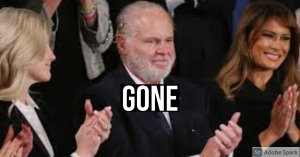 He was an iconic voice for the late-20th century American conservative movement for decades as well as a political icon for the Boomer generation. Rush Limbaugh, the famed radio host, has now died at the age of seventy as the Daily News reports.

Conservative talk show host Rush Limbaugh died Wednesday after a battle with lung cancer. He was 70.

The right-wing broadcaster was awarded the Presidential Medal of Freedom on Feb. 4, one day after he announced his diagnosis.

The Missouri native was the nation’s second-highest paid radio personality, according to Forbes, which put his net worth at $600 million. His $87 million annual income is second only to Howard Stern’s deal with SIRIUSXM.

Limbaugh had four marriages including his last one to party planner Kathryn Rogers, 43, whom he wed in 2010. Supreme Court justice Clarence Thomas officiated wedding number three.

He famously used the term “Femi-nazi” to describe women’s rights advocates and said in 2015 that “Feminism was established so as to allow unattractive women easier access to the mainstream of pop culture.”

Rush Limbaugh promotes sexist ‘Joe and the Hoe’ stories, including allegations Kamala Harris was an ‘escort’ »
Limbaugh was unflinchingly supportive of President Trump, who bestowed upon him the nation’s highest civilian honor during the 2020 State of the Union address.

He was known for his fiery and articulate rhetoric, which was always impassioned, though not necessarily accurate.

Limbaugh, a cigar smoker for 30-years, had expressed skepticism over the dangers of smoking. He also compared COVID-19 to the common cold in February and falsely told his more than million listeners there had been 18 other COVIDs.

“The Rush Limbaugh Show” was syndicated in 1988 and served as the prototype for the modern-day, right-wing media movement.

“Vanity Fair” once likened the shock-jock’s influence among conservatives to Oprah Winfrey’s sway with women. He is credited with heavily influencing voters in 1994 when Republicans won the House of Representatives during President Clinton’s first term.

Limbaugh was also a top-selling author, despite attending only one year of college at Southeast Missouri State University, where he reportedly “flunked everything,” according to his mother. She reportedly told a biographer her outspoken son only seemed interested in being on the radio.

In 2014, he won the Author of the Year award at the Children’s Choice Book Awards for his work on “Rush Revere and the Brave Pilgrims: Time-Travel Adventures With Exceptional Americans.”

“I love America,” Limbaugh said after receiving that honor from young readers. “I wish everybody did.”

His kids book was commercially successful, despite being panned by literary critics including Kirkus reviews, which called it “exceptionally bad.”

He credited conservative intellectual William F. Buckley as a role-model, calling the influential commentator “indescribable” and “irreplaceable” after his death in 2008.

In his last broadcast of 2020, an emotional Limbaugh told listeners he didn’t expect to see the end of the year and was grateful he did. (source)

Limbaugh’s death is the end of an era, and it is going to mark a shift in the radio business, as business models, especially for profits here, will be a thing to watch. Likewise, it creates a vacuum in the market, which already is being filled by Youtube, Twitch, Dlive, and other platforms to grow.

It will be interesting to see what happens.

Again? He Who Believes Trump And The Republican Line At This Point Is Deluding Himself
Major Protestant Pastor Asks For “Forgiveness” For “Disrespecting” And “Hurting” Men Who Love Indulging Sins That Cry To Heaven For Vengeance
Follow