You are here: Home › Major Protestant Pastor Asks For “Forgiveness” For “Disrespecting” And “Hurting” Men Who Love Indulging Sins That Cry To Heaven For Vengeance 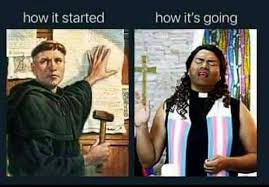 American Protestant pastors are known for having big and strong voices on major social issues, but can strangely ‘change’ when opinions about those matters change with the social climate.

The famed pastor Max Lucado recently made a statement, accordign to the Christian Post, where he apologized for his criticisms of the LGBT made almost two decades ago.

Christian author and pastor Max Lucado, who holds biblical Christian views on marriage, issued an apology for “disrespecting” and “hurting” the LGBT community in his past sermons after the Washington National Cathedral was criticized for inviting him as a guest speaker.

“In 2004 I preached a sermon on the topic of same-sex marriage. I now see that, in that sermon, I was disrespectful. I was hurtful,” wrote Lucado, pastor of Oak Hills Church, a nondenominational Christian church in San Antonio, Texas, in a letter last week to the Episcopal Church’s Cathedral Church of Saint Peter and Paul in the City and the Diocese of Washington, also known as the Washington National Cathedral.

“I wounded people in ways that were devastating,” Lucado, who spoke at the National Cathedral on Feb. 7, continued. “I should have done better. It grieves me that my words have hurt or been used to hurt the LGBTQ community. I apologize to you and I ask forgiveness of Christ.”

Some members of the Episcopal Church, a denomination known for holding liberal views on marriage and sexuality issues, launched a petition asking the cathedral’s dean, Randy Hollerith, to rescind Lucado’s invitation to preach.

“Lucado’s teachings and preaching inflicts active harm on LGBTQ people,” the petition read. “To cite one example, in 2004 he wrote of his fears that homosexuality would lead to ‘legalized incest’ and likened same-sex marriage to incest and bestiality. Fear-mongering and dehumanizing messages from powerful speakers like Lucado have been used to justify rollbacks of LGBTQ rights and to exclude LGBTQ people from civil protections and sacred rites. To our knowledge, Lucado has not publicly renounced these views.”

“To be clear, I believe in the traditional biblical understanding of marriage, but I also believe in a God of unbounded grace and love,” he said in his letter. “LGBTQ individuals and LGBTQ families must be respected and treated with love. They are beloved children of God because they are made in the image and likeness of God.

Now, one might say that there is room for difference in how to approach the sodomite issue in order to be most effective. That said, being effective does not mean apologizing for truth.

This is one of four sins which the Bible explicitly says ‘cries out to Heaven for vengeance’. It is a moral evil that will destroy a man. In the most objective, non-controversial sense, if something is that deadly, what does one need to apologize for on speaking against it? Social approbation or the lack thereof is not a reason, since objective truth does not change.

What it seems we can see here happening is a continued dive towards submission to the LGBT agenda. There are problems in the Catholic Church, but not only are the divisions known, they are able to be addressed because the teaching of the Church has not changed as it cannot, just as even though Arius had the supermajority opinion of the hierarchy and common man, he did not win because objective truth does not change. I have mentioned the scandal that exists and is slowly growing from the Orthodox in spite of years of suppression. The Evangelical situation is worse, since religion is personalized outside of the context of sacred tradition and history, isolated to a cultural period, and has no standard to root itself into other than contemporary opinion, and when one adds nationalism to this, becomes a reflection of the contemporary ethos and not true morality.

A trend to watch for among the Evangelicals will be greater submission to all things Sodom and accepting it as a part of “normal” Christianity, while the divide between the different Christian groups, especially those who resist the LGBT, becomes pronounced to the point of legal confrontation and possible suppression in the name of anti-hate or other such laws. Even if they do apologize, it is unlikely that said apologies will ever be accepted, with it becoming ritual used to humiliate one rather than to make peace, because sin does not want peace but domination, as it has always been.

End Of An Era: Rush Limbaugh Dead At 70
There Was Never A Golden Age Of Christendom. The Entire History Of Christendom Is Warfare Against Satanic Forces That Wish To Destroy Her
Follow