You are here: Home › New Chip Can Detect Stress Levels In Human Skin 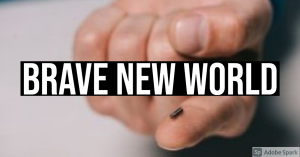 As nanotechnology becomes smaller and more comprehensive, it has come to take on a shape not of something that represents a bright future, but a “brave new world” imagined by Huxley, where the average man is watched all of the time, for everything he does, and is judge constantly on them. This is the concept behind the Chinese “Social Credit” system being implemented today, and is what shows evidence, albeit in a different form of coming to other parts of the word.

But if that was not enough, now Study Finds reports that researchers in Switzerland have created a chip that upon contact with human skin can measure stress through a variety of means.

From fitness monitors to sleep trackers, wearable technology has taken self-improvement to new heights. Now, a new device developed by Swiss researchers might warn you if your stress levels are growing dangerously high.

Scientists at the Swiss Federal Institute of Technology Lausanne (EPFL) are designing a wearable sensor that measures cortisol in human sweat. Cortisol is the “stress hormone.” Normally, cortisol levels fluctuate throughout the day, following a circadian rhythm. When dealing with certain diseases however, the circadian rhythm is disrupted.

“In people who suffer from stress-related diseases, this circadian rhythm is completely thrown off,” says Adrian Ionescu, head of EPFL’s Nanoelectronic Devices Laboratory (Nanolab) in a university release. “And if the body makes too much or not enough cortisol, that can seriously damage an individual’s health, potentially leading to obesity, cardiovascular disease, depression or burnout.”

Ionescu and his colleagues think their wearable could help doctors detect and treat this conditions and other cortisol-related diseases such as Cushing’s disease (too much cortisol) or Addison’s disease (not enough cortisol).

For their sensor, Nanolab scientists decided to measure cortisol in sweat, although it can also be measured in saliva and urine. This enabled them to create a non-invasive wearable, making it easy and painless for people to use.

Their wearable is a simple patch containing a transistor and an electrode made from graphene, a material used in microchips. The graphene makes the sensor ultra-sensitive, ensuring the most accurate data. It is the first non-invasive tool that allows scientists and doctors to capture cortisol levels across an entire day.

Nanolab scientists worked with Xsensio to test their cortisol detector. Xsensio makes the Lab-on-SkinTM platform, the perfect vehicle for testing the cortisol wearable. Now, the next step is to bring the sensor to the clinic.

“The joint R&D team at EPFL and Xsensio reached an important R&D milestone in the detection of the cortisol hormone,” adds Xsensio CEO Esmeralda Megally. “We look forward to testing this new sensor in a hospital setting and unlocking new insight into how our body works.” After that, she added, Xsensio will make the cortisol sensor a key part of its Lab-on-SkinTM platform to bring stress monitoring to next-gen wearables.” (source)

Some will say this is about ‘helping’ people, and while it does have a use for this, the reality is that what purpose would something such as this serve other than to monitor, and arguably report back, the “stresses” a person is going through?

This is an interesting concept, because it could be used not just by marketers, but police and government to track and get a further insight into what one does and says measured against “stress periods” .

This is an extension of the trend I have warned about with the increase in surveillance and a loss of personal freedom, where technology that was used to liberate people and connected them to each other is now being used to bind and enslave them on a global scale like never seen before.