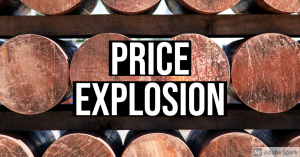 Copper is said to be the only metal that has a “PhD in economics” because due to the extensive use of copper as an industrial metal crossing into all areas including technology, copper price fluxuations, especially severe ones, often indicate economic troubles.

It is thus with great interest, noting all of the troubles in the US, rising prices, declining currency values, and general instability, that Goldman Sachs reports by way of Zero Hedge that copper prices are increasing sharply, and due to claims of ‘shortages’ will not see price reductions until at least 2023.

China’s return from the LNY holiday has heralded a burst of onshore investor copper buying after the holiday season with limited inventory builds evident so far. This latter trend during a period of what should be peak surplus generation onshore, has particularly bullish implications given that the market is now on the cusp of the tightest phase in what we expect to be the largest deficit in a decade. The very low starting point for inventories at the beginning of this year has been further exacerbated by a counter seasonal stock draw so far in Q1 on a scale only seen once before in recent history (in 2004). These trends point towards a high risk of scarcity conditions over the coming months.

This means that Goldman now expects copper to be trading at record highs in 1 year. Anyway, back to the note:

Chinese investors have refocused on copper. The absence of Chinese investor copper buying for the year-to-LNY period was a clear restraint on copper price action. Chinese buying had been the key buying channel from early November which took copper from $6,600/t to $8,000/t in just six weeks but then dissipated from year-end. However, today on the open after a week holiday we saw SHFE copper interest increase by 22k lots (+8%) set against a strong rise in price…This points clearly to the return of very strong onshore investor buying. The absence of this investor flow pre-LNY was in our view predominantly related to typical position squaring into the holiday period rather than reflecting a substantially different view on copper. With that calendar restraint now passing, we expect a sustained wave of Chinese buying. We would note that total SHFE copper open interest (324k lots) is still 16% below late November recent peak (377k lots) as well as 40% below record highs. Therefore we believe there is ample capacity for further onshore positioning extension in copper. We would also note that positioning on Western exchanges (LME, COMEX) has remained relatively stable at significant net long levels, but still substantially below record net length (COMEX money manager net long still 30% below September 2017 record net long). In our view the market remain some distance from approaching peak spec long capacity

Citi agreed with Goldman, expecting a substantial supply deficit until at least 2023.

It wasn’t just copper: other commodities have also soared with lithium, key to powering electric cars and backing up renewable energy, rebounding. And while tin headed for an unprecedented 16th straight weekly gain amid a supply squeeze, Platinum has been this year’s top-performing major precious metal, thanks to its use in catalytic converters. (source)

If you want to buy electronic things, get them now.

If you need to do home improvements, get your supplies now. I said this last year, noting drops in shipping cartons and having talked with a number of hardware store employees and even owners. Sure enough, my predictions have started to come true as, while the trend has been delayed, the existence of “permanent shortages” is becoming a way of life.

Look at any hardware store. Or even food store. Or another kind of store that is corporate chain. Mom-and-pop shops, if they are still left, tend to be the exception, but any major corporate store has systematic, long-term product shortages. If products seem to be on the shelves, look behind them, because due to “blocking” (product shelf setting), there often is only one or two of said product on any given shelf.

Tools are going to be hit very hard by any sort of disruption like the above, because of the logistics necessary in producing and shipping them, as well as the parts they entail for use. Large tools will be affected less because there is just less demand- most people don’t want or need a giant tool, but many do want smaller things, and production for those will be hit hard.

In other words, the trends we predicted and warned about over a year ago are continuing and simply gathering speed. There is not going to be a recovery until the debt issue is dealt with, and that likely will only come at the point of force after all other options are exhausted beyond capacity.

You Think Texas Is Bad? Tigray Now Suffering From Blackouts
Christian Self Professed Moral Activists, As Usual, Are A Day Too Late And A Dollar Short
Follow