You are here: Home › Not A Joke- Biden Plays Mario Kart With Granddaughter At Camp David While Kamala Takes Calls From “World Leaders” 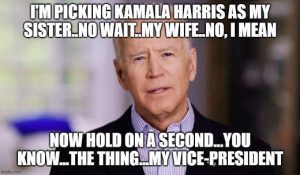 There are many feelings about Biden on all political sides. My view has been that it seems, in my opinion, that Biden is an elderly man with clear health problems who needs to be at home with his grandchildren enjoying what time he has, but instead is being abused in that his cognitive decline is being exploited to further a greater political agenda. Given the stress of the job, it is possible he will not last the full term, and that Kamala Harris might be ‘appointed’ president as a result.

A few days ago, the New York Post reported on a curious story, where at Camp David, Biden was not taking care of political matters, but was playing Mario Kart with his granddaughter.

Nevermind the impeachment trial — President Biden spent time playing video games with his granddaughter during a weekend at Camp David, the presidential retreat in the Maryland mountains.

Naomi Biden, the daughter of Hunter Biden, posted in an Instagram story Saturday that her grandfather beat her “barely” in a game of “Mario Kart.”

“Secret service made an exception and allowed him to drive himself,” she posted, linking to a short video of them playing the video games. “A little rusty, but he still won (barely).”

The White House said that Biden and his family are spending the weekend at Camp David for the first time since he entered the White House in January.

Other than meeting with his national security team, the president has nothing else on his schedule.

He arrived there on Friday afternoon by motorcade after Air Force One landed in Hagerstown, Md. (source)

Meanwhile, Kamala Harris has been taking calls and meeting with world leaders- and without Biden.

Vice President Kamala Harris is proving that she will play an important role in the White House as she hosts calls with foreign leaders without President Biden.

A readout from the White House published on Monday showed that Harris took a call with French President Emannuel Macron, where she “expressed her commitment to strengthening bilateral ties.”

“Vice President Harris and President Macron agreed on the need for close bilateral and multilateral cooperation to address COVID-19, climate change, and support democracy at home and around the world,” the statement read. “They also discussed numerous regional challenges, including those in the Middle East and Africa, and the need to confront them together.”

The president himself did put a call into Macron last month, on Jan. 24.

Though Biden knows many of the world leaders he will be dealing with from his tenure as vice president in the Obama administration, he likely has not dealt extensively with Macron since he was elected in 2017.

A spokesperson for the White House did not return Fox News’ request for comment.

As noted by the Council on Foreign Relations, the vice president’s role in foreign policy has grown since the mid-20th century. Dick Cheney is credited for shaping President George W. Bush’s foreign policy priorities and Biden managed relations under President Barack Obama with several key countries.

However, conservatives have repeated concerns about Biden’s ability to carry out his four years in office as the oldest president ever elected at the age of 78. (source)

This is what Biden SHOULD be doing. Biden is sick and old. It is what also makes this such a scandal. Biden is president- not Harris. He is the one who is supposed to be meeting with world leaders, not playing video games. But then again< I cannot blame Biden- one cannot blame a sick, old person with cognitive decline, as one does not even surely know if he is fully aware of what is going on. Instead, I blame Biden’s wife, who likely knows very well what is happening, Biden’s children for not trying to stop this charade, Kamala Harris and her husband- who absolutely are aware of what is going on and are using him -as well as the team of Biden staffers and other persons supporting the current charade to drive political opinion in order to cause domestic tensions leading to possible conflict.

This whole presidency is an evil charade, exploiting a sick old man as the country burns.