You are here: Home › Islamic Terrorists Slaughter Sixteen Christians, Burn Down A Catholic Church In The Congo 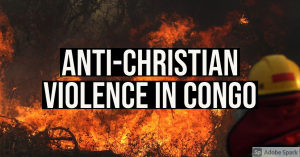 As the trend of violence continues to rise in Africa amid a series of tensions, another tragedy took place in the Congo, where sixteen Christians were murdered and a Catholic Church was burned by what the Christian Post reports so far have been identified as Muslim rebels.

A suspected Islamic extremist group raid resulted in the deaths of 13 civilians and three soldiers, as well as the burning of a Catholic church on Sunday morning in the northeastern Ituri province of the Democratic Republic of the Congo, according to an initial assessment.

Allied Democratic Forces, an Islamic terrorist group, was blamed by an army spokesperson for being behind the deadly massacre in Ndakya village.

But the group’s involvement is not yet confirmed, according to Reuters. ADF has been prevalent in the area since the 1990s and killed around 850 people in 2020, according to a United Nations estimate.

Christophe Munyanderu, the coordinator of the Convention for the Respect of Human Rights, told the news agency that gunmen opened fire upon entering the village Sunday morning.

The United States-based persecuted church advocacy group International Christian Concern’s Regional Manager for Africa Nathan Johnson said there is lots of violence in eastern DRC due to over 100 active rebel groups in the region.

He said ADF is one of the largest, most active militant groups and is believed to have ties to the Islamic State terrorist organization.

“The attacks are daily,” Johnson told CP. “There is vast underreporting.”

Even though DRC’s population is around 95% Christian, violence from Islamic extremism continually worsens, especially in the eastern region. (source)