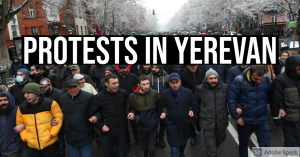 The recent Armenian-Azeri war was a major victory for Azerbaijan and Turkey and a disastrous loss for Armenia. There is a lot of tension on both sides, and people are upset. While the world is consumed with other news, right now RFERL reports that thousands of Armenians have descended on the capitol of Yerevan, demanding that the current PM, Nikol Pashinian, resign over his handling of the war.

Thousands of protesters have rallied in the Armenian capital to demand the resignation of Prime Minister Nikol Pashinian over his handling of a six-week war with Azerbaijan last year.

Demonstrators gathered on February 20 in Freedom Square in central Yerevan under a heavy police presence shouting, “Armenia without Nikol!” and “Nikol traitor!”

Pashinian has refused calls to step down but raised the possibility of holding early parliamentary elections.

Pashinian, who swept to power amid nationwide protests in 2018, has come under fire since agreeing to a Moscow-brokered deal with Azerbaijan that took effect on November 10. The deal ended six weeks of fierce fighting in and around the breakaway region of Nagorno-Karabakh that saw ethnic Armenian forces suffer battlefield defeat.

A coalition uniting 16 opposition parties has been holding anti-government demonstrations in Yerevan and other parts of the country in a bid to force Pashinian to hand over power to an interim government.

“It doesn’t matter how many people gather on the square, Nikol Pashinian will not resign voluntarily,” Manukian told a crowd of protesters waving Armenian flags in Freedom Square.

Despite facing a united opposition front, Pashinian’s My Step bloc maintains an overwhelming majority in parliament.

Under the Moscow-brokered cease-fire, a chunk of Nagorno-Karabakh and all seven districts around it were placed under Azerbaijani administration after almost 30 years of control by Armenians.

Nagorno-Karabakh is internationally recognized as part of Azerbaijan, but the ethnic Armenians who make up most of the region’s population reject Azerbaijani rule.

They had been governing their own affairs, with support from Armenia, since Azerbaijan’s troops and Azeri civilians were pushed out of the region and seven adjacent districts in a war that ended in a cease-fire in 1994. (source)

Considering the anger from the Armenian public, the unhealed tensions between the nations, the aspirations of Turkey, the move of Russia into the area, it is not just that a trend will be continued tensions in this area, but that the situation is volatile and could explode back into another conflict over a small matter.