You are here: Home › Now Their Turn- Southern Baptists Divided Over The Sin That Cries To Heaven For Vengeance 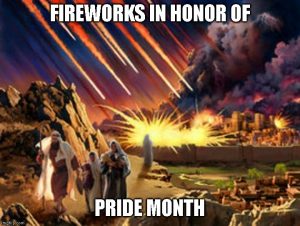 There has always been a problem in the Catholic Church with bad priests or people who have a serious interest in very bad sins. This is to be expected- if the Church is a hospital for all sinners, founded by Christ Himself to touch every race of man, and the whole world is to be gathered into her, then it is only inevitable to conclude that she would see all problems that the human race has, no matter how awful it might be, and if she did not see such a horrible problem, that such a problem would not exist because of the expanse, nature, and mission of the Church. The fact that many other sects will proclaim they do not have “so-and-so” a problem is proof that sect is not directly founded by Christ, since it means it does not reach to the whole world.

This is also not to say that sin is good. Rather, it is to say that they lack the completion of expanse to the human race, and to that, also the ability to conclusively provide an antidote to problems. Remember that seventeen centuries ago, it was normal- as in three-quarters of the Church -denied Jesus’ divinity. However, this never changed dogma or doctrine- as it cannot -and eventually, the truth prevailed. A parallel can be drawn between this situation and the proliferation of sodomy, where while most Christians and arguably people in the Church (especially in the western world) support that sin which cries out to Heaven for vengeance and wrath, the dogma and doctrine, no matter what any pope, cardinal, bishop, priest, or group says, can change the Church’s condemnation of this sin or the antidote to it as evidenced throughout doctrine, time, and history. And just like with the Arian monstrosity, eventually the current situation will pass and be defeated. This was not promised to other churches, and indeed, they may initially seem stronger, but always cave.

For example, a recent AP report found that there is a lot of division, and possibly another coming split ahead, in the Southern Baptists over this issue.

Divisions over race, politics, gender and LGBTQ issues are roiling America’s largest Protestant denomination, the Southern Baptist Convention, ahead of a meeting of its executive committee next week.

On the agenda are two items reflecting those divisions: A recommendation that a church in Kennesaw, Georgia, be ousted from the SBC because it accepted LGBTQ people into its congregation, contravening Southern Baptist doctrine; and a report by an executive committee task force criticizing the widely respected leader of the SBC’s public policy arm, the Rev. Russell Moore. Among the grievances against Moore: His outspoken criticism of Donald Trump during Trump’s 2016 election campaign and his presidency.

Towne View began welcoming LGBTQ worshippers in October 2019 after a same-sex couple with three adopted children asked Conrad if they could attend, a decision he defends as the right thing to do.

“The alternative would have been to say, ‘We’re probably not ready for this,’ but I couldn’t do that,” said Conrad, pastor there since 1994.

Conrad has the option of appealing an expulsion, but he’s making plans to affiliate at least temporarily with the Cooperative Baptist Fellowship, which allows its churches to set their own policies regarding LGBTQ inclusion.

Conrad says about 30% of his congregation — which now numbers about 125 — left his church over the issue, forcing some budget cutbacks, including a pay cut for Conrad.

“But we have had overwhelmingly positive feedback from the community,” he said. “Letters, emails, Facebook messages, phone calls — people telling their own story of rejection by their church and how grateful they’d be to find a place where they’re welcome.”

The most recent disfellowship of an SBC church occurred a year ago when the executive committee ousted Ranchland Heights Baptist Church of Midland, Texas, because it employed a registered sex offender as pastor.

In 2019 the SBC leadership pledged strong action on sex abuse after news reports that hundreds of clergy and staff had been accused of misconduct over the previous 20 years. But critics remain dissatisfied. (source)

It will be important to watch, as it has already been growing for a while, a trend of American Christianity fracturing on the LGBT issue, because most support it, and at this point, being a ‘good American’ in many ways means supporting this sin, which is in direct opposition to not merely “traditional morality”, but morality in the objective sense, as moral truth are not bound to time or place, but are absolute principles that do not chance since they come from God, and He does not change.

This is a major reason why Christianity will continue to decline. Because as long as truth is linked to national sentiment or personal interpretation outside of objective morality, it will eventually fall to cultural norms. Likewise, it is also a reason why those who continue to reject these evil eventually will likely find themselves persecuted by the greater society.