You are here: Home › Climate Refugees Are The Next Trend? 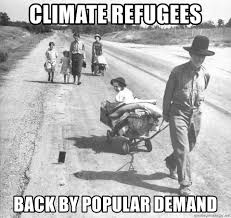 The talk about “climate change” on the left or right is almost always political. Weather patterns change whether or not people like it, but the emphasis on ‘disaster’ is often just a poor excuse for other and far more dangerous or destructive policies, such as eugenics. Noting this, it is interesting that with the recent storm in Texas, Biden has been talking about- and prior to it as well -the possibility of “climate refugees”, or increasing migration and encouraging it based on “climate change”.

President Biden’s recent executive order on refugees includes a direction for a study on the impacts of climate change on migration, as well as options for the “protection and resettlement of individuals” displaced by environmental change.

The order for the study comes in a Feb. 4 order on “Rebuilding and Enhancing Programs to Resettle Refugees and Planning for the Impact of Climate Change on Migration.”

The study will be led by the national security adviser, in consultation with the secretaries of State, Defense and Homeland Security — along with USAID and the director of national intelligence — and will be on “climate change and its impact on migration, including forced migration, internal displacement, and planned relocation.”

The order says the report will include “discussion of the international security implications of climate-related migration” as well as “options for protection and resettlement of individuals displaced directly or indirectly from climate change.”

The request for the report comes as part of the effort by Biden to increase the number of refugees taken in by the U.S. each year. Former President Donald Trump lowered the cap to 15,000, and Biden is moving to increase that to 125,000 for the next fiscal year.

The order also requests “mechanisms for identifying such individuals, including through referrals” and “proposals for how these findings should affect use of United States foreign assistance to mitigate the negative impact of climate change” as well as how the U.S. can work with international groups and NGOs. (source)

Now refugees are an issue separate from “climate change” in the objective sense. However, what it does seem is there is a ‘push’ to encourage migration of many peoples to the Western world that tensions generated by them having come can be exploited to foment hostility and eventually a conflict that the governments can use for their benefit.

A trend to look for, with the passing of this Texas disaster but also amid the fighting in Ethiopia, is the more liberal use of the term “climate refugee”, and to see if this shows up in Europe and like back in 2016, has a consequence of generating new waves of migration that lead to an increase in nationalism and militarism.