You are here: Home › UK Tribunal Discriminates Against Christian Actress For Private Opposition To Sodom 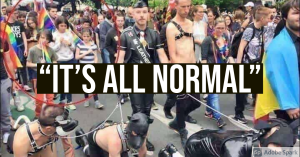 A Christian actress in the UK, who auditioned for and took a part in a pay about homosexuality, was fired after her employer discovered she personally has expressed in the past opposition to the LGBT. She took her case to the loca employment tribunal in the UK, who ruled against her.

The actress Seyi Omooba has lost the employment tribunal claim that she brought against Leicester’s Curve Theatre and talent agency Global Artists. Omooba, a Christian, was was due to star in a production of the musical The Color Purple, but was dismissed after the discovery of historic anti-gay online comments. She subsequently sued for religious discrimination and breach of contract.

Omooba was originally cast in the lead role of Celie in the stage adaptation of Alice Walker’s Pulitzer Prize-winning novel, in a joint production by Curve and Birmingham Hippodrome. Celie is widely considered to be a lesbian character, developing an intimate relationship with female jazz singer Shug Avery.

In 2019, Hamilton actor Aaron Lee Lambert shared a screenshot of Omooba’s Facebook post from 2014, in which she said: “I do not believe you can be born gay, and I do not believe homosexuality is right”, adding “Christians, we need to step up and love but also tell the truth of God’s word. I am tired of lukewarm Christianity.” Lambert asked whether the actress stood by her post, given her casting as “an LGBTQ character.”

Following widespread public criticism of Omooba, Leicester Curve and Birmingham Hippodrome released a statement in response, saying that “following careful reflection it has been decided that Seyi will no longer be involved with the production.”

The actress then launched legal action, which was due to begin last April, but was postponed due to the pandemic. Omooba dropped her tribunal against Birmingham Hippodrome, accepting that they played a “minor role” in her dismissal, but continued to sue the Leicester Theatre Trust and her agents Michael Garrett Associates Ltd (Global Artists, on the grounds of religious discrimination and a breach of contract. (source)

There are several questions I have, including why one would want even to be associated with anything to do with sodom, especially as a Christian, knowing the hatred that so many of them have for Christians and the open desire to destroy and abuse them, and given the legal prominence and protections that many have, how it is very difficult for Christians to respond within the legal system successfully.

It is not a surprise, therefore, that she was indeed discriminated against. I have reported the numbers on Shoebat.com before, but with 75% of people under 40 supporting sodomite “marriage” and a numerical extrapolation suggesting 93% support of the behavior, being a Christian who opposes this moral evil is a very hard thing and it is going to get one into trouble.

This trend of discrimination against Christians is going to continue. Christians lost the culture war, they lost it a long time ago, and at this point one is simply dealing with the consequences going forward. Culturally and politically speaking, Christians and Christianity are likely going to become irrelevant. This does not mean irrelevant in God’s eyes- it does mean in a social sense, being a Christian is going to be something celebrated in the future catacombs, and a subculture of people who genuinely care, not simply a marker of social or national identity.

The world is going back towards tribalism, a trend that has been often noted here. A part of that tribalism means, as being a Christian is to unite with people on the basis of grace before race, that Christianity will further decline, and such will be replaced by concepts common to the pagan world such as blood and soil nationalism, which the Church warned about a century ago.

This does not mean the end of Christianity. Rather, it is another step along the road to Calvary, that even the Church must endure, and like with Christ, the inevitable end of the Crucifixion brings after a the Resurrection.