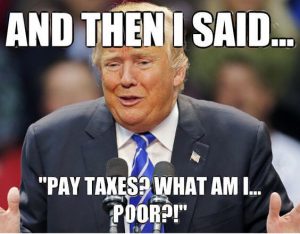 Trump’s tax returns have been a subject of much discussion because tax documents always tell something about a person, good or bad, as unless one is doing openly illegal activity, they force disclosure of what one has or does not have. As such, there has been a giant fight over access to Trump’s tax records between Trump and various state agencies seeking ostensibly to prosecute him. Now according to CNN, it appears a new development, and another twist in the ‘Trump saga’ is about to happen as the Supreme Court has ruled that Trump’s tax returns can be released to NY state prosecutors.

The Supreme Court cleared the way for a New York prosecutor to obtain former President Donald Trump’s tax returns, dealing a massive loss to Trump who has fiercely fought to shield his financial papers from prosecutors.

The documents will be subject to grand jury secrecy rules that restrict their public release.

The ruling is a bitter loss for Trump, even if the tax records are shielded from public disclosure, after he consistently argued that the subpoena issued by Manhattan District Attorney Cyrus Vance was overbroad and issued in bad faith.

It means that the grand jury investigation into alleged hush money payments and other issues will no longer be hampered by Trump’s fight to keep the documents secret.

The ruling was issued without comment or noted dissent.

Vance celebrated the order, saying in a tweet, “The work continues.”

Trump’s legal team did not immediately respond to a request for comment.

Although Trump’s personal lawyers may continue to fight their appeal in the case, the fact that the documents will be released by Trump’s long term accounting firm, Mazars, effectively ends the dispute.

Last July, the Supreme Court, voting 7-2, rejected the Trump’s broad claims of immunity from a state criminal subpoena seeking his tax returns and said that as president he was not entitled to any kind of heightened standard unavailable to ordinary citizens. The justices sent the case back to the lower court so that the president could make more targeted objections regarding the scope of the subpoena.

In October, a federal appeals court said “there is nothing to suggest that these are anything but run-of-the-mill documents typically relevant to a grand jury investigation into possible financial or corporate misconduct.” (source)

One might recall that in September 2020, the New York Times published a very interesting investigative piece on Trump’s taxes, showing large losses and a man who cultivated the image of wealth without actually having it, and instead teetering on the edge of bankruptcy.

It will be interesting to see what comes out of this investigation, and what the future holds for Trump, other than a likely dive into his own personal poverty.

The Mind Of A Heretic Is The Mind Of A Psychopath
Major American Investor Who Caught And Warned About The Subprime Crisis Declares What We Have Been Telling You, Says Major Instability In Stocks Will Happen
Follow