You are here: Home › Yellen Attacks Bitcoin, Is This Preparation For A “Digital Dollar”? 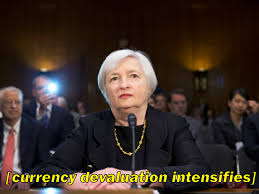 CNBC reported that with all of the interest and investor-related near chaos taking place over Bitcoin, Treasury Secretary Janet Yellen attacked it, saying it is unstable and used by criminals.

Treasury Secretary Janet Yellen issued a warning Monday about the dangers that bitcoin poses both to investors and the public.

Despite a sharp slide in price to start the week, the cryptocurrency continues to trade above $53,000 as it has received boosts from various sources. Elon Musk’s Tesla recently made a substantial purchase and has said it will accept bitcoin for transactions.

However, Yellen said there remain important questions about legitimacy and stability.

“I don’t think that bitcoin … is widely used as a transaction mechanism,” she told CNBC’s Andrew Ross Sorkin at the New York Times’ “DealBook” conference. “To the extent it is used I fear it’s often for illicit finance. It’s an extremely inefficient way of conducting transactions, and the amount of energy that’s consumed in processing those transactions is staggering.”

In addition to consumption concerns, bitcoin also is considered to be a tool of those involved in a number of illegal activities because its use is difficult to trace.

Then there’s volatility, as the cryptocurrency’s price has seen rapid peaks and valleys during its existence.

“It is a highly speculative asset and you know I think people should be aware it can be extremely volatile and I do worry about potential losses that investors can suffer,” Yellen said.

Various government agencies have contemplated the idea of making an alternate digital currency with the hopes that it would open up the global payments system to those who don’t have access.

The Federal Reserve, where Yellen once served as chair, has studied the issue and discussed the possibility of a new digital currency along with a payments system it expects to roll out over the next several years.

“I think it could result in faster, safer and cheaper payments, which I think are important goals,” Yellen said. (source)

Now no fiat currency, like Bitcoin or the US dollar, is ever fully stable because they are backed by a faith in the thing itself divorced from a real asset. Likewise, one may want to remember that a lot of the illegal activity on the Darkweb that Bitcoin often is used as money for- drugs, child sexual abuse, gun running -if they are not just scams that provide nothing, a great many and possibly the greater number are honeypots set up by governments to ‘catch criminals’, with the US government being the prime example as they are the leader.

The US has a lot to talk about “cyber criminality” when certain government agencies have a decades long history of engaging in, funding, encouraging, or outright enticing to entrap people in the worst forms of criminal behavior while then declaring herself to be innocent and using her own laws to shield herself from accountability.

What seems interesting about this, is how Bitcoin is being attacked over this, when the government used Bitcoin for the same ends.

Likewise, it prompts the questions of, what does one suggest be done about it?

This is where things become interesting, because digital currency is a major trend that is set to grow. However, the issue of private digital currencies may be less important than per se, public ones.

In other words, it is worth asking, since the trend is not going to chance, if Yellen’s “attack” on the currency is simply to decry one evil, based on real data, to instead get rid of it and replace it with a digital US dollar that can be much more easily tracked, monitored, and in the case of people who are considered ‘undesirable’ by the system, pulled and people refused receipt of their funds. Forget about the days of ‘freezing funds’, and hunting down cash, all it would take in such an economy is the press of a button and not only are all accounts or the ability to buy and sell stopped, but also every single transaction that a man makes can be tracked for the duration of his entire life.

Imagine a world where every item one buys- from the time he is a teenager to his death -can be tracked, organized, categorized, monitored, and studied in a database. A digital currency would theoretically allow this, because everything is electronic, and all one needs to do is to make a mark in a computer that so long as one has the space to store it, it can stay indefinitely.

This is the world that we are looking at, potentially, for the future. Bitcoin already records all transactions ever made as a permanent part of the blockchain record, so there is no privacy in the real sense. Why would the government not do the same, and with greater and far, far more ruthless efficiency?

The issue is not about Bitcoin, just as it is often not about the main topic in many discussions. It is about a principle behind the thing being discussed, which is for the government to replace it with their own, and far more invasive version.

Major American Investor Who Caught And Warned About The Subprime Crisis Declares What We Have Been Telling You, Says Major Instability In Stocks Will Happen
Serbian Orthodox Church Elects New Patriarch
Follow