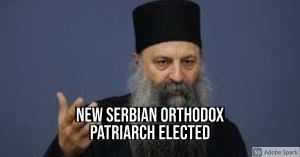 The Serbian Orthodox Church is the fifth largest of the Orthodox Churches in the world (after Russia, Ukraine, Romania, and Greece in that particular order). After her previous Patriarch Irinej died in November 2020 from COVID complications, the church has elected a new patriarch, Porfirje, to lead the church.

A Vatican cardinal on Friday congratulated the new leader of the Serbian Orthodox Church on his election and said he hoped that relations with the Catholic Church would “continue to grow.”

In a Feb. 19 message, Cardinal Kurt Koch, president of the Pontifical Council for Promoting Christian Unity, congratulated Metropolitan Porfirije after he was chosen as patriarch of the Serbian Orthodox Church.

The 59-year-old was elected on Feb. 18 during an assembly of bishops at the Temple of St. Sava in the Serbian capital, Belgrade.

Koch wrote: “Learning with joy of your recent election and enthronement as Patriarch of Serbia, I express my warmest congratulations in the assurance of my spiritual closeness to Your Holiness and to the Serbian Orthodox Church entrusted to your pastoral care.”

“It is my heartfelt prayer that the Holy Spirit may bestow upon you every gift for the spiritual good of the faithful of your flock, and for the common witness to the Gospel of Orthodox and Catholics ‘that the world may believe’ (John 17:21).”

He continued: “I ask the Lord in a particular way to grant that our cooperation, which had already been so fruitful with your venerable predecessors, may continue to grow and may strengthen our commitment to fostering relations between our Churches.”

While the Church is based in Serbia, a majority of the populations of Montenegro and Republika Srpska, one of the two entities of Bosnia and Herzegovina, are also Serbian Orthodox. The Church has around 12 million members worldwide.

The new patriarch previously served as Metropolitan of Zagreb in Croatia and Ljubljana in Slovenia from 2014 to 2021. Before that, he was a chaplain to the Serbian army. According to media reports, he has a good relationship with Serbian President Aleksandar Vučić.

His election comes three months after the death of the previous patriarch, Irinej. Porfirije’s predecessor, who had led the Church since 2010, died at the age of 90 after testing positive for COVID-19.

The new patriarch’s election took place in two stages. In the first, a ballot of the bishops, he reportedly won the largest number of votes. In the second, his name and the names of the other two leading candidates were placed in envelopes that were then put in a copy of the Gospel. Porfirije’s name was drawn out by a senior monk in a process believed to be guided by the Holy Spirit.

No pope has visited Serbia, but Porfirije’s election will raise hopes in Rome that Pope Francis might one day be invited to the country, where approximately 5% of the population is Catholic. (source)

Given the current situation with Ukraine, the fact that Russia is increasingly isolated and not by her historical choice of autarchalism which she is also choosing, it will be interesting to see what the Serbian Patriarch does, since she currently is the most “pro-Russian” vocally of the Orthodox Churches, but her history also shows a consistent overlap with Turkish (and prior to that Byzantine) policy. As such, it is possible that she may eventually turn against the Russians from her current positions, and if this was to happen, the biggest manifestation would be through support, in some way, of the legitimacy of Ukraine’s patriarchy.

One does not know what the future holds here. What can be said is that Balkan politics, the cruel, confused, and often anything but religious thing that it is but which uses religion to conceal tribal conflicts going back to the first migrations of the Slavs to the Balkan region, is rearing its head again, and the actions of the Serbian Patriarch will be an important trend to watch for the future.

Yellen Attacks Bitcoin, Is This Preparation For A “Digital Dollar”?
A Dozen Japanese Companies Cease Business With China Over Forced Uyghur Labor
Follow