You are here: Home › Love Or Hate Her, At Least On This Issue, AOC Is Consistent 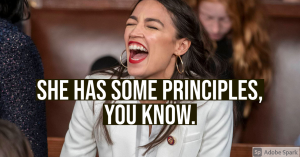 Something that politicians are notorious for doing, especially in the US, is promising one thing and then refusing intentionally to deliver on it, or making a litany of bogus excuses for why said cannot be done. This is a very common problem, it is not new, and yet people consistently fall for the same tricks over and over. However, it can be said that in this context, there are some politicians who are consistent. Most of these are Democrats, because as experience has shown, love or hate them, generally speaking, the Democrats are willing to follow through with their promises, or at least make what seems to be decent attempts to follow through. For example, probably Obama’s main promised was he said he wanted nationalized healthcare moving towards a single-payer system, and such is what he was able to do. One can compare this with Trump, who promised a border wall to his supporters- “Build the wall” -but never did anything about it, and made every excuse not to do something about it.

This is not about parties. It is about principle, for good or for bad, and based on this, the Democrats generally tend to do a better job than the Republicans, the latter which claim to be different but then once taking power tend to subscribe to same policy that the Democrat promised but in an incomplete, poor way that makes his supporters and his opponents disappointed and angry alike.

But returning to the issue of consistently, lover her or hate her, New York Congresswoman Alexandria Ocasio-Cortez recently criticized Biden- as she did with Trump -for their use of cages for those child migrants detained in border crossings as The Hill reports.

“This is not okay, never has been okay, never will be okay – no matter the administration or party,” Ocasio-Cortez tweeted.

The facility is located in Carrizo Springs, Texas, and will be used to hold children ages 13 to 17. The facility is capable of holding up to 700 migrant children.

“It’s only 2 mos into this admin & our fraught, unjust immigration system will not transform in that time,” Ocasio-Cortez said.

The White House also defended the facility on Tuesday, saying that it was only temporary and is needed because of the pandemic.

“It’s a temporary reopening during COVID-19, our intention is very much to close it, but we want to make sure we can follow COVID protocols,” press secretary Jen Psaki said.

Unaccompanied migrant children were moved into the facility the day it was opened. It is unclear how long the administration plans to keep the facility’s doors open. (source)

This is not about if one likes AOC or not. Rather, it is to her credit that, at least on this issue, she is consistent on the basis of principle, not party.

No man is perfect. Perfection cannot be expected. However, there needs to be at least attempts made, generally speaking, to be consistent between what one says and what one does, no matter what the deed. Doing evil is not good, and one is supposed to do what is right. However, if a man is consistently wrong based on principle, as wrong as he is, it is to be noted that he is at least following a principle for his actions. This cannot be said about so many others, especially politicians, whose only consistently is seeing the continued reign of their tenure in office and enriching themselves while saying what they think has to be said in order to get re-elected without care for the future or the lives they impact.

Say what you want about AOC, or her other positions. However, at least on this issue, she does not seem to have changed because of party issues, which is more than can be said about many politicians, and certainly more about Republicans than Democrats. If people are upset with this, then the best way to resolve it is to stop being inconsistent with basic principles, and to fight aggressively for them, even if it means costing one his future term in power- after all, are not politicians supposed to be “public servants” and not servants for themselves?

Love her or hate her, at least on this issue Alexandria Ocasio-Cortez has principles she is willing to be consistent with. That is more than what can be said about many other politicians, especially and including Trump whose image continues to infatuate people more than the reality of what he did, did not, and refused to do.

Man Murders His Neighbor, Cuts Her Heart Out And Cooks It With Potatoes, Says He Did It To “Release The Demons”
Slovakia Now Has The Biggest Covid Death Rate In The World
Follow