You are here: Home › Man Murders His Neighbor, Cuts Her Heart Out And Cooks It With Potatoes, Says He Did It To “Release The Demons” 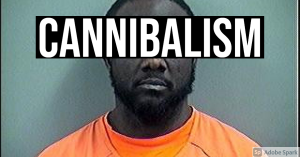 For a while, Shoebat.com has noted that there is a tendency towards cannibalism taking place in society. When one combines this with the rise in extreme and odd crimes, especially of a grotesque and occult nature, we find a picture of a society where the trends is away from social cohesion, God, and peace toward chaos, violence, and organized anarchy. The future is more of a science fiction novel but more violent, than it is about something that may want to look forward to.

Another story of particular attention comes from the Oklahoman, where a man was arrested for murdering his neighbor, cutting her heart out, taking it home and cooking it with potatoes. When asked why he did it, he said it was because he wanted to “release the demons”.

A triple murder suspect has confessed, saying he killed a neighbor first and cut her heart out to eat at home, the OSBI reported.

“He took the heart back to 214 West Minnesota, Chickasha,” an agent with the Oklahoma State Bureau of Investigation told a judge in a request for a search warrant.

“He cooked the heart with potatoes to feed to his family to release the demons,” the agent wrote.

Lawrence Paul Anderson is accused of killing the neighbor at her home and then going to his home and killing his uncle and a 4-year-old girl on Feb. 9.

He also is accused of stabbing his aunt. She survived.

The case already has sparked outrage because the repeat felon had been released early from prison in January. He had been sentenced in 2017 to serve 20 years behind bars but got out after Gov. Kevin Stitt commuted his time.

The governor commuted the sentence to nine years at the recommendation of the Oklahoma Pardon and Parole Board. Anderson served a little more than three years. He had been staying with his uncle, Leon Pye, and aunt, Delsie Pye, since his release.

“This has to be addressed by the Legislature, sooner rather than later, because more people are going to get killed,” Grady County District Attorney Jason Hicks said Feb. 11.

The prosecutor plans to charge Anderson, 42, on Tuesday. The death penalty “is on the table,” Hicks said Monday.

Chickasha police went to 214 W Minnesota on Feb. 9 after a woman called 911 for help. An officer forced his way into the house after hearing a woman yelling. Inside they found Leon Pye, 67, already dead and his granddaughter, Kaeos Yates, injured. “She was pronounced deceased in the ambulance on scene,” the OSBI agent wrote in the search warrant request.

Anderson was arrested inside the Pye home. “Chickasha Police Officers observed Anderson throwing up in the living room into some pillows,” the OSBI agent wrote. (source)

We Told You At Shoebat.com It Was Coming, New Study Finds That One In Six Zoomers Is A Sodomite
Love Or Hate Her, At Least On This Issue, AOC Is Consistent
Follow