You are here: Home › China Has Landmark Divorce Ruling 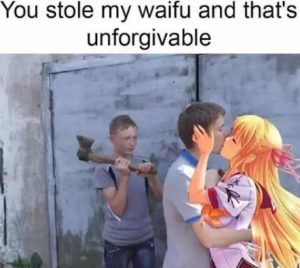 In Internet culture, for a long time there is the term “waifu”, which was invented by anime fans to describe an anime character than young men have an attraction to, and many times unhealthy, as it involves the arguable fetishization of an object or non-existent cartoon character in the real world (see above photo, for example). However, since anime has Japanese roots, it can also refer to the same fixations but of western, predominately (but not exclusively) white men on asian women. Whereas “western” (again predominately white, but not exclusively) women are looked upon with condescension for their behaviors, they are contrasted to a ‘pure’ asian wife that is held to be the opposite in values and action, and thus more highly valued. Hence, some men commonly will say they want to go to parts of Asia- Japan, Korea, China, southeast Asia, or more -to find their “waifu”, and most likely as a part of the process engage in prolific and meaningless fornication with many different women.

Just as the “waifu” is a fantasy from a cartoon, so is it in real life. Yes, there are problems with “western” women, and very serious ones, but that is generally because the western world- meaning the whole of Europe’s nations and the US/Canada for our purposes here -for a variety of factors but overall rooted in the forgetting and removal of God from life at the kernel of the matter, has been the ‘ground zero’ for the implementation, testing, and proliferation of ideas that caused such problems. There are fewer issues in other nations, but it is related to the spread of bad ideas, not the people themselves. This can be evidenced in how once women from those nations come to the US and settle, if not they, then their children adopt the same problems. It is not an issue of nature, but a philosophical one, and since philosophy does not discriminate by race, it can affect anybody if it takes a hold.

Because China is so large in many ways and has gained a lot of power, she has been experiencing more of the problems found in the Western world. Far from being a land of magical “waifus” and folk tales meant to tempt the fancies of young men, Chinese women are people like any other, and as China has changed, the relations between the genders have changed, so that now Chinese women are behaving more like American or “western” women.

NBC News reports on a landmark court case from China

A landmark ruling in China has triggered an intense debate by putting the answer at about $4 a day.

In a Beijing divorce court, a judge ruled earlier this month that a woman should receive 50,000 yuan (about $7,700) for “household labor” following a split from her husband.

Chinese state media names the woman as Ms. Wang and said she married her husband, Mr. Chen, in 2015, before separating and then divorcing five years later. The couple have one son.

In a first of its kind ruling, Wang was granted compensation for domestic work under a new Civil Code, which came into force in China in January. A cornerstone of President Xi Jinping’s push to reform the country’s legal system, the code seeks to strengthen personal rights.

“Where one spouse is burdened with additional duties for raising children, looking after the elderly or assisting the other spouse in his/her work, the said spouse has the right to request compensation upon divorce against the other party,” according to Article 1088 of the Civil Code.

Judge Feng Miao of the Fangshan District People’s Court of Beijing divided the couple’s joint physical property and relied on the Civil Code to rule on “intangible property” resulting from the marriage, which included housework, she told state media on Monday.

The judge added that the courts would need to “accumulate experience” to determine the amount of compensation in such cases in the future.

The case has sparked a heated public debate on social media in China on gender rights and responsibilities.

Although many welcome the legal recognition of domestic duties as progressive, others are critical of the amount awarded to Wang, noting the high cost of living in Beijing — stating the funds would barely cover the salary of a domestic cleaner or nanny in the capital.

A hashtag about the case has garnered more than 570 million views so far on the Chinese social media platform, Weibo, and around 22,000 discussions.

“There is no clear standard on how much the compensation should be. However, the court made the calculation based on the marriage period, family income, the living standard of the community and more,” Beijing based divorce lawyer Yi Yi told NBC News on Wednesday.
(source)

The issue here is not about the value of housework. It is about the nature of marriage in a society where family is being destroyed.

I have pointed out before that due to the one-child policy, millions of girls were murdered in favor of boys. This created a gender imbalance that we are seeing today, where there are far more boys that girls. To that, the fast economic and political rise of China has prompted people to be more choosy with their standards, to demand more of possible suitors and out of life.

When one combines this with the general liberalization of attitudes toward intimate relations, China has been rapidly transforming and in many ways has already become very feminist in many ways, especially in the cities and this trend will likely spread to the rural areas even more.

The “feminist-ization” of China will be something to watch for. Since we know that China already has very low birth rates, in combination with the existing family problems, it is possible that China may see a continued collapse of family life, population, and potentially her own long-term political stability, with feminism adding another “straw” on the camel’s back that could press to break her in the future.

Study: 30% Of Covid Patients Report Having Continuous Symptoms Even After Recovering
Congress Moves To Establish The Practices Of Sodom As A Protected Civil Rights Category
Follow