You are here: Home › Congress Moves To Establish The Practices Of Sodom As A Protected Civil Rights Category 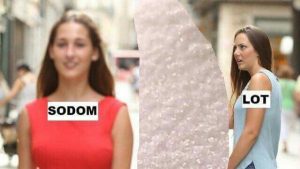 In America, the concept of “civil rights” is often a promoted and aggressively embraced thing because many people, understandably so, equivocate it with the ethical and moral good of the common man. Many times, this is so because it has been legislation passed in the name of “civil rights” that attempted in some way to address social issues where people for often objectively immoral reasons were abused. A famous example of this is the abuse of people because of their skin color, which albeit was already dying, still persisted until formally put to rest by such legislation from the Federal government.

That said, the aggressive pursuit of “civil rights” is not always a cure all for social ills. Sometimes, they can make things work because in the name of seeking a perceived good, it creates a host of other evils with worse potential or actual consequences. A major example of this is how the values and especially practices of sodom are not only accepted, but increasingly cut in proverbial stone into US law. To oppose Sodom is to not just have a moral position on a historically clear not just Christian teaching, but as the Catholic Faith is the fulfillment and perfection of moral right for all time clearly articulated by God, the rejection of those billions of people now, in the past, and before Christ who while not knowing or following Christ necessarily, but because the practice is directly opposed to the natural law and created order. While it was common among the pagan world, even many pagans- especially those who warmly embraced the Faith when the missionaries came -rejected those practices because they understood at some level, by divine grace working through their understanding of the world, that such things were unnatural, wrong, and unhealthy.

However, in America today, being a ‘good citizen’ veritably means not just rejecting this, but professing one’s love of this sin whose action cries out, as Sacred Scripture clearly notes (and is in a separate category of moral wrong only accompanied by the willful murder of the innocent, the oppression of the widow, poor, and orphan, and the deprivation of the working man of his justly earned wages) to Heaven for vengeance, is not just expected, but he who refuses to do this is cast aside like a cancer from the body politic for doing so when it is the opposite that is true. Shadrach, Mishach, and Abednego refused to bow to a idol and were cast into a furnace at the order of Nebuchadnezzar, but if they were alive today, it would be because they refused to hail the great intellectual phallus that has become the new idol of contemporary American life and would be case out from social and economic life before being dragged into a court on “hate” charges while the blasphemous pride flag waved and Lee Greenwood’s “proud to be an American” played over loudspeakers.

We have noted for many years that if patterns did not change, the US would eventually enshrine protections for this behavior into law. With a Democrat controlled Congress in power, the Associated Press reports that legislation is moving now to give practitioners of this act the full protections of civil rights law.

he Democratic-led House is poised to pass a bill that would enshrine LGBTQ protections in the nation’s labor and civil rights laws, a top priority of President Joe Biden, though the legislation faces an uphill battle in the Senate.

The Equality Act amends existing civil rights law to explicitly include sexual orientation and gender identification as protected characteristics. The protections would extend to employment, housing, loan applications, education, public accommodations and other areas. Supporters say the law before the House on Thursday is long overdue and would ensure that every person is treated equally under the law.

“In the absence of federal civil rights protection, there are members of the LGBTQ community who are fair game in the eyes of the law to be targeted, based on sexual orientation,” said House Democratic Conference Chairman Hakeem Jeffries, D-N.Y. “That is not America.”

Republicans broadly oppose the legislation, echoing concerns from religious groups and social conservatives who worry the bill would force people to take actions that contradict their religious beliefs. They warn that faith-based adoption agencies seeking to place children with a married mother and father could be forced to close, or that private schools would have to hire staff whose conduct violates tenets of the school’s faith.

“The bill may have equality in the title, but it certainly does not serve all Americans,” said Rep. Virginia Foxx, R-N.C. “It is a vehicle for serious, harmful consequences.”

The House passed the Equality Act in the last Congress with unanimous Democratic support and the backing of eight Republicans, but Donald Trump’s White House opposed the measure and it was not considered in the Senate, where 60 votes will be needed to overcome procedural hurdles. Democrats are trying to revive it now that they have control of Congress and the White House, but passage appears unlikely in the evenly divided Senate.

The Supreme Court provided the LGBTQ community with a resounding victory last year in a 6-3 ruling that said the Civil Rights Act of 1964 applied to LGBTQ workers when it comes to barring discrimination on the basis of sex. Civil rights groups have encouraged Congress to follow up that decision and ensure that anti-bias protections addressing such areas as housing, public accommodations and public services are applied in all 50 states.

Biden made clear his support for the Equality Act in the lead-up to last year’s election, saying it would be one of his first priorities.

Democratic Rep. Mary Gay Scanlon said her home state of Pennsylvania was one of 30 that doesn’t have legal protections for LGBTQ people. She said the Equality Act is needed to end “the patchwork of state laws” around gay rights and create “uniform nationwide protection.” (source)

We warned it was coming.

We talked about this for years.

It was only a matter of time before it happened.

If you think “the Republicans” are going to stop it you will be disappointed again.

Now it is here, and while people were distracted, especially Christians, they are about to get a vicious wake up.

However, it is too late.

It has been noted before that regardless of religious belief, race, or gender, the numbers are firm that if you are under the age of 40, 75% support “marriage” of such individuals, and statistical extrapolation reasonably shows at 93% approval rating of the practice.

God told Lot, after much discussion with Him, that if there were ten million righteous men in Sodom, He would spare the city. Now the population of Sodom is unknown at the time, but US Census statistics show that as of 2020, there are about 110 million people who are between the ages of 15 and 39. In other words, for all purposes, adults.

Ask yourself, could you find ten million Americans who conclusively and clearly oppose the values of Sodom who are under the age of 40 in the category?

If you want to try, I wish you the best of luck. Remember that a recent Gallup poll found that one in six people in Generation Z consider themselves sodomites.

If God destroyed Sodom by fire from Heaven, and it was just one city, what happens when the most powerful nation in history embraces and enforces the values of sodom on the world?

Just think about it.