You are here: Home › Scientists Work On “Brain Editing” Out Feelings And Ideas 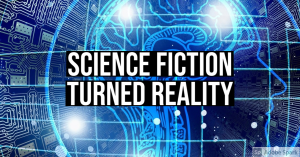 One of the most dangerous things that science fiction proposes is a world where men can “edit” each other’s minds to create a vision of reality outside of individual experience. Such a thing might sound nice, but it clearly a thing that, while admitting there can be good uses, is almost absolutely going to be used for the worst possible things imaginable. It is the dream of every cruel tyrant and person who would want to attempt to make himself in the form of a temporal ‘divinity’, to have power over the minds of men.

Thankfully men have souls and that while interacting with the body are not solely dependent on it. However, this does not stop men from trying this. As it has been reported by Study Finds, scientists are now working on methods to try an “edit” memories to get rid of or encourage other feelings.

They believe that in the future these techniques may lead to new treatments for patients dealing with issues like PTSD or generalized anxiety disorder.

All of this is incredibly promising, but researchers admit they haven’t perfected their approach just yet. While the treatment they developed has proven effective with many, some individuals haven’t seen the same benefits.

This kind of new “brain hacking” is a thing to watch for the future. While it cannot destroy the soul, it can hurt people, and it seems explicit that is the intention. After all, what could the purpose of this be sued for, if not to terrorize one man into death or submission, and for another to make him into a ‘super soldier’ who does exactly what he is told and fears nothing?

The autonomy of the soul, which belongs to God, is what matters most here, and cannot be taken away. But this action is part of a trend throughout human history and has been exacerbated in modern times with technology and logistical systems as well as research, which is to try and have some men make themselves ‘divine’ and also to enslave the rest of their fellow men beneath them. The trend is that far from an ideal vision of the future, things look a lot more like the past. The famous tale of “The Island of Dr. Moreau” by H.G. Wells comes to mind, as such manipulations are more about control than “freedom” or helping people. However, just as with Wells’ story, things work well until they do not any more, and the unintentional consequences can be deadly.