You are here: Home › Turkey Cooks The Broth And Blows On The Coals As The US Skewers bin Salman And Prepares To Roast Him Alive 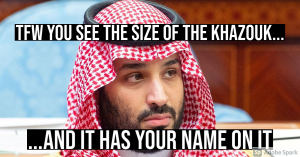 For years, Shoebat.com has been warning about the coming death of Saudi Arabia. Now I should be clear, I am not saying that Saudi Arabia is actively dead, in the past or this moment. However, she is a “dead man walking” in that without the US actively protecting her, Saudi Arabia is going to be at the mercy of Turkey, a historical world power who is rising again, and hates Saudi Arabia. The proverbial “goose” of the House of Saud has been “cooked”, and like Poe’s famous tale “The Fall of the House of Ussher”, it is only a matter of time before radical changes take place in Saudi Arabia, since it is likely the US will give more free room for Turkish involvement, and the House of Saud at best will survive as a sort of contemporary Turkish vassal with a likely partial purge of their family, while in the worst and also potential scenario, could see the entire family not sitting on their thrones as royalty, but atop the points of a field of khazouks from Ottoman carnage.

Shoebat.com has reported before that for the past several years, there seems to be an ongoing fight in the ranks of the House of Saud over power. The older members want to keep power among themselves and tend to be more conservative and keep to US alliances, while the younger and more ‘liberal’ ranks, represented by the young Prince Mohammed bin Salman (MbS), are taking a more “open” and yet also aggressive approach to asserting Saudi Arabia’s position by reaching out to alliances with the US enemy of China.

Saudi Arabia has never been a “friend” of the US, and the only reason the US cares about her is because of ARAMOCO, or the state-run oil company that the US uses to supply her economy and by extension her empire. Until the US is ready to get rid of Saudi Arabia- something that especially the older members do not want -Saudi Arabia has a chance at surviving in its current form.

In November 2018, I wrote an article entitled Did Saudi Arabia Just Settle The Family Business While Cucking Turkey At The Same Time?, where I said that the murder and pathetic Saudi cover-up of Turkish journalist Jamal Khashoggi, which enfuriated Turkey and caused a serious diplomatic rift almost to the point of military action, may have been a set up to take down MbS and put the older members of the family back into power. The crisis has already lead to the stripping of most duties from MbS and his isolation from the family. Now according to CNN, the CIA is set to release “top secret” documents further indicting MbS in the murder.

The two private jets used by a Saudi Arabian assassination squad that killed and allegedly dismembered journalist Jamal Khashoggi were owned by a company that less than a year prior had been seized by the Kingdom’s powerful crown prince, Mohammed bin Salman, according to recently filed court documents seen by CNN.

The documents, filed as part of a Canadian civil lawsuit earlier this year, are labeled “Top Secret” and signed by a Saudi minister who relayed the orders of the crown prince, the young de facto ruler of Saudi Arabia.

“According to the instruction of His Highness the Crown Prince,” the minister wrote according to a translation, “immediately approve the completion of the necessary procedures for this.”

The filing lays out how ownership of Sky Prime Aviation was ordered to be transferred into the country’s $400 billion sovereign wealth fund in late 2017. The company’s planes were later used in the October 2018 killing of Khashoggi.

“He would have been tracking [the company] and would’ve been aware of how it was used,” Dan Hoffman, the former director of the CIA’s Middle East Division, said of the powerful crown prince. “And it’s just more potential evidence that he was in the know on this. Which has always been the contention. This is just more evidence of that.”

As soon as Thursday, the US intelligence community is set to release a long-awaited report with new public details about those behind the death of Khashoggi. Not long after the Saudi journalist was killed at the Saudi consulate in Istanbul, the CIA assessed with high confidence that MBS had personally ordered the killing, but intelligence officials never spoke publicly or presented evidence. A United Nations investigator found in June 2019 it was “inconceivable” that MBS wasn’t aware of the operation.

Saudi officials in Washington and Riyadh did not immediately respond to the new revelations. MBS has denied that he ordered Khashoggi’s murder but said that he bears responsibility. Eight suspects were given prison sentences in what the UN investigator called a “parody of justice.”

This is not just an accident. This is intentional.

The US and Turkey are historical allies going back to the 19th century, where the US sold guns in mass to the Ottoman Empire and in 1887 formally opened relations with her that have persisted since. Saudi Arabia exists for oil and American geopolitical expansion, and little more.

While it cannot be definitively confirmed, the trends suggest that this action is intended by the US to further support the American military presence in the Middle East, satisfying the Turkish lust for blood caused by the murder and also checking the Turkish attempts to use this to expand their military and political presence. By sacrificing MbS, it keeps the older members of the Saud family in power, which for now keeps the American economic machine working at a regular pace, which maintains the current state of affairs. From the view of the House of Saud, it is a a question of existence, for as I noted above, do they want to go on with “life as normal” for now, or hang from a khazouk in the desert sun as the buzzards look down on their dehydrated, dying bodies for a meal after the Ottoman military has come and gone, marching towards Mecca to reclaim her historical position as the “guardians” of Islam?

The House of Saud is not a fool, at least the older members. As far as they are concerned, they will work with the CIA and Turkey to, proverbially speaking cook the broth, chop the vegetable, stoke the fires inside of the coals, and turn the spit while roasting their own so long as the rest of the House of Saud can stay alive…