You are here: Home › Now It’s LBG Versus T Over Whose Gender ‘Ideology’ Is “Right”

By Andrew Bieszad on February 26, 2021 in Featured, General 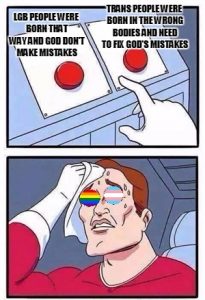 While the LGBT bloc is presented often as a single unit, there is much division within it. It is a matter of personal opinion, based on experience, that such is done in order to make a public and unified fact to push back against Christian morality, but once this has been done, the bloc begins to fight with itself. LGB are often allied to one side (although there has been a lot of fighting between LG and B on the nature of identity), with T on the other. This is because there are blocs within the LGB that do not believe that a man- correctly so -can switch genders because it is unnatural. This is where, for example, the TERF wars began, because these are radical feminists- some sodomites and others not -who embrace the LGB but reject the T, and are called Trans-Exlusionary Radical Feminists (TERFs).

However, as the Christian Post reports, the war is on between the LGB versus the T with nationwide protests against gender mutilation surgeries and the drugging of same persons with hormones being done on children under the guises of so-called “legitimate” medical practice.

Parents of transgender-identifying teens held protests outside children’s hospitals that house transgender clinics in six cities across the United States and Canada in a joint effort spearheaded by these families and a recently-formed LGB group.

Rallies were held in Los Angeles, Chicago, Philadelphia, Dallas, Hartford, and Ontario, Canada on Valentine’s Day to protest against the use of experimental drugs and cross-sex hormones on youth who are struggling with same-sex attraction, are on the autism spectrum, or suffering from depression or other mental struggles.

Carrie Hathorn, the national organizer for LGB Fight Back, a group that was formed last summer, and two mothers of trans-identified children, both of whom spoke with The Christian Post on condition of anonymity, said it’s vital the public take action to resist the heavily financed transgender movement that they say is causing catastrophic harm to young people.

The prescribing of puberty blockers and cross-sex hormones followed by cosmetic surgeries that lead to sterility are unethical and abusive to children, they stressed.

“Lesbians, gay men, and bisexual people were the first to be targeted for ‘trans’ medical experimentation,” Hathorn explained. “Big Med and Big Pharma used transgenderism to Trojan Horse the LGB movement. They turned PRIDE into a corporate event, then added the T to LGB. Big Med and Big Pharma see LGB people as a market to exploit for profit,” she said.

Due to the shame they often experienced within the broader culture, these industries are providing gays and lesbians a medicalized “way to pretend to be straight by making us into facsimiles of the opposite sex,” she said, asserting that this is a billionaire-funded movement that has become corporatized, turning their bodies into marketable commodities to be modified under the guise of “progress.”

Among the financial backers pushing gender identity policies in the legal structures of nations worldwide through various philanthropic activities and lobbying efforts are tech titan Tim Gill and John Stryker, who is heir to a $13.6 billion medical corporation and the creator of the Arcus Foundation, according to an earlier report in First Things. (source)

Now stepping back here, it is important to point out there is no good side here. Azazel may say that Beelzebub is evil and want to fight what he is doing, but both are demons from hell and evil. There is no choice between two evils if those are both the choices, as none can be an ally.

That said, I present this story to note, as a trend, that while the sodomite bloc is rising in support, they are not as unified as they present themselves to be, and there is a lot of division. Considering that they define themselves by moral evils, it is likely they are more susceptible to divisions than Christian groups.

Some of the trends in the future to look forward to include more fighting between the blocs. For Christians, it is time not to ‘pick a side’ to ‘ally with’, but rather to get back to fundamentals of what should always have been done, which is to consistently declare that sodom- all blocs -is a sin that cries out to Heaven for vengeance, and the answer is the same as before, which is to repent, believe, turn away from sin, and be faithful to the Gospel.

In other words, to focus on the only thing that matters, because nothing else matters.