You are here: Home › Over One Thousand TSA Officers Contract COVID-19 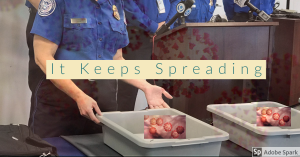 Many times, people laugh at the TSA airline screeners, and while there are people who do bad or disturbing things that work for the TSA, most officers are regular people trying to get a job and provide for their needs and those of their families. However, The Seattle Times reports that a scandal is developing as over a thousand TSA employees have become sick with COVID-19 and six have died.

More than 1,000 employees at the Transportation Security Administration have tested positive for the coronavirus, according to figures the agency released Thursday. Nearly all of them are security officers who have continued to work screening passengers at airports throughout the pandemic.

Hydrick Thomas, president of the union that represents the officers, said the figure is a reflection of the agency’s ongoing struggle to do enough to protect its employees. Air travel numbers, which collapsed in the early stages of the coronavirus outbreak, are steadily climbing even as the virus is surging again: Nearly 2.7 million people traveled over the Fourth of July holiday weekend.

“Right now they’re bringing people back to work and the social distance is not in total effect,” Thomas said. “Employees are still complaining there’s too many of them in one area.”

In all, TSA says 1,018 employees have tested positive. Its 50,000-strong force of screening officers has borne the brunt, accounting for 907 of the cases. Six employees have died, as has a contractor.

Face coverings are now mandatory for officers. And after a whistleblower complaint, the agency ordered more steps, including the use of protective face shields in some instances and regular changing of gloves after coming into contact with travelers and their property.

Thomas said the rollout of some of the steps has been uneven. Even before the pandemic began, officers had been complaining about a shortage of gloves, which Thomas called an important tool of their trade. That has been resolved, he said, and the agency says it instructs officers to regularly change their gloves. But the face shields aren’t always available, Thomas said. TSA is allowing officers to use goggles when there are shortages. Where it can, the TSA has been installing plastic barriers for officers to work behind.

Thomas said the agency could be doing more, including taking employees’ temperatures or conducting health screenings at the beginning of their shifts.

“There should be someone in management trained to do those type of tests when you come in,” he said.

The virus spread rapidly among TSA’s workforce in the spring, forcing officers to stay home to try to limit its spread. The difference then was that air travel had come to an almost complete standstill, with fewer than 100,000 people passing through the agency’s checkpoints on some days, compared with a normal volume of 2 million or more.

The figures released by TSA show JFK remains the hardest-hit airport, with 116 agency employees testing positive. The most recent officer to test positive there last worked May 23.

But new cases are spread widely. Officers from 43 airports within the past two weeks have tested positive. They include officers working at airports in states across the South, Southwest and Midwest, where cases have been climbing among the population. (source)

As we have noted before, viruses do not discriminate on the basis of race, ethnicity, politics, or other divisions. They just infect, and when that happens it can have devastating consequences.

Please be safe, and remember that there is likely a second wave incoming that, while I hope I am wrong and it does not happen, has a strong change of indeed happening and inevitably will yield deadly consequences.

Supreme Court Rules That About Half Of Oklahoma Is Indian Land
The Government Of Turkey Just Made The Hagia Sophia Into A Mosque. Let Us Remember The Martyrs That Were Beheaded When The Muslims Conquered Constantinople And Brought Abomination Into The Church By Making It Into A Mosque
Follow