You are here: Home › Bahamas Close Due To COVID-19 Spread 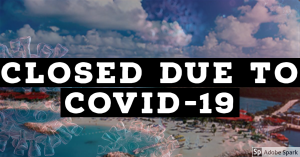 The Bahamas are considered by many to be a Caribbean tropical paradise, but COVID-19 has also found her way there and is affecting people the same as it is in other countries. As the number of cases of infected continues to increase, the country has declared a ban on most international flights, saying that the traveling to and from the islands have been linked to the spread of the disease as NBC News reports.

The prime minister of the Bahamas announced a series of coronavirus-related restrictions Sunday, including a ban on most international flights, as the number of cases in the Caribbean nation surges.

“Our current situation demands decisive action if we are to avoid being overrun and defeated by this virus,” Prime Minister Hubert Minnis said in a national address. “We cannot allow our hospitals to be overrun.”

Minnis said the number of cases had almost tripled since the Bahamas began reopening its borders July 1. The total number of cases had risen to 153, he said, with most of the new cases appearing on one of the country’s largest islands, Grand Bahama.

Many of the new cases were traced to residents returning to the Bahamas, he said. (source)