You are here: Home › Enjoy The Summer, Because The Christmas Slay Ride Is Coming 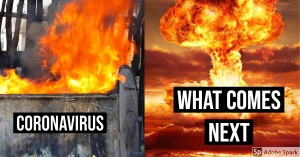 There has been a lot of talk about the current problems amid riots and social instability that many have never seen in their lifetimes and seems unprecedented.

However, I would like to say that now isn’t that bad by comparison from what it seems the future will bring.

Allow me to elaborate on this.

Right now, there are millions of people out of work who are living off of special government payments- the Coronavirus stimulus bill -recently passed by Congress and soon to be a second one. People are working, but the work situations have become much more tenuous amid supply chain disruptions and an uncertain future, especially where work is becoming more scarce.

Right now, a lot of people are looking at the riots taking place in Seattle and other cities and asking if things could get worse, and I answer yes. Simply put, if people are mad right now, what happens when one adds to that homelessness, the inability to pay for utilities, and hunger, especially in the wintertime?

The answer is simple- it is always a formula for violence and instability. It doesn’t help there is more talk of food shortages and because of the general devaluation of the currency by way of money printing, the looming spectre of hyperinflation that is driving up market prices not because the value of real goods and assets has increased but because the value of the money itself hash decreased and the only way to compensate for the decline in value is to raise prices, not out of greed but economic necessity.

This is why I have spoken of the situation for the future as not a Christmas “sleigh ride”- such as going through the snow on a horse-drawn sleigh that is popular in American lore -but rather a “slay ride”, implying violence and a sort of butchery found in a horror film, except this time the film is real life, and the slaughter will be to people’s personal finances and the retail market since being forced to spend money on essentials such as food, water, and utilities, and maybe not even having enough for that, the retail sector is going to be absolutely decimated since 25% to 40%, as I have noted before is made in the time from Thanksgiving to Christmas. With most likely poor sales for the future, there will inevitably be more layoffs, more job destruction, and more poverty.

If one wants to see what the retail sector is going to look like, one only needs to go to a local mall. Many of them are dead or dying as evidenced by the ongoing store closures, the proliferation of people “hanging out” but not shopping (as in looking for a warm place to stay, not actually going there for leisure purposes) has continued to grow, and the fact that many of the stores are disorganized, dirty, or just falling apart. The mall, being a creation of the consumerist post-World War II economy is, like the post-World War II world, falling apart at the seams as the world returns to tribalism and nationalism.

Then there is the future. COVID-19 is not going to go away for Christmas, and will persist into 2021. What does this mean for the future of job and payments? What about apartments? How about business? Who can buy when there is no money to spend? What about the effects of money printing? Will there be a third, and possibly fourth rounds of simulus checks? What will the effects be on prices? What about food or material shortages, which are already bad now but getting worse with each day?

I have insisted that COVID-19 is not over, but is just getting started. These are just a few of the effects that we can see, and it is not going to get better until the debt is gotten rid of, and at this point, the only way this is likely going to happen is until the money printers are run to such a point that the dollar has the value of the deutschmark in Weimar Germany a century ago.

The country will eventually recover, but it is going to take a long time. It is not unreasonable that for the next five, possibly ten years, there will be heavy economic problems for the US that will cause a tremendous amount of problems and will affect all people.

This is why I say for people to enjoy what exists now, not in a lavish or spendthrift way, but to recognize that the summertime for 2020 is not a time of unrest, but actual peace in spite of the real unrest happening and likely in comparison to the unrest that is to come in the future when people are seriously unable to pay their bills and have nothing to look forward to for the future except misery and so will be more inclined than ever before towards radical solutions, including revolutionary ideas.

I have commonly used the tale of the Ant and the Grasshopper as an analogy for how people in the US right now need to look at the coming events. In summer, the ant worked very hard but the grasshopper did not, so when the winter came, the grasshoppper froze to death while the ant was able to survive.

Summer is well on its way, but there is still time for the prudent to learn and make good decisions. If one has not already, start by making preparations for the future. This should not be thought of as anything extreme, but rather about making good decisions amid the conditions, kind of like if one does not have a raincoat and one knows that he has to be outside all day and that a storm is going to come, to go an get a raincoat before the storm arrives and it is too late to avoid being soaked.

Normalcy will eventually return, since equilibrium in any system always has to be restored. However, it is for now to prepare for the future and how to make due as the social pendulum aggressively shifts with the changing of social conditions, and one of those is that for the near future, especially later this year, there is a very strong chance things will become a lot worse, and end not with a sleigh ride, but a slay ride that will continue the slaughter of the economy that is taking place right now.