You are here: Home › AP Move Elects To Capitalize “Black” And Not “white” 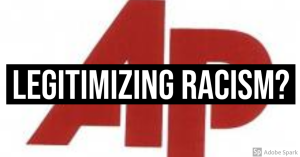 There is a lot of talk about racism right now, and it is coming from both ends of the political spectrum. According to a recent story from the AP, the AP itself has decided to capitalize “Black” and not “white”, claiming that “white people” have no shared culture.

After changing its usage rules last month to capitalize the word “Black” when used in the context of race and culture, The Associated Press on Monday said it would not do the same for “white.”

The AP said white people in general have much less shared history and culture, and don’t have the experience of being discriminated against because of skin color.

Protests following the death of George Floyd, which led to discussions of policing and Confederate symbols, also prompted many news organizations to examine their own practices and staffing. The Associated Press, whose Stylebook is widely influential in the industry, announced June 19 it would make Black uppercase.

In some ways, the decision over “white” has been more ticklish. The National Association of Black Journalists and some Black scholars have said white should be capitalized, too.

“We agree that white people’s skin color plays into systemic inequalities and injustices, and we want our journalism to robustly explore these problems,” John Daniszewski, the AP’s vice president for standards, said in a memo to staff Monday. “But capitalizing the term white, as is done by white supremacists, risks subtly conveying legitimacy to such beliefs.”

Columbia Journalism Review, the Wall Street Journal, The New York Times, USA Today, the Los Angeles Times, NBC News and Chicago Tribune are among the organizations that have recently said they would capitalize Black but have not done so for white.

“White doesn’t represent a shared culture and history in the way Black does,” The New York Times said on July 5 in explaining its decision.

CNN, Fox News and The San Diego Union-Tribune said they will give white the uppercase, noting it was consistent with Black, Asian, Latino and other ethnic groups. Fox cited NABJ’s advice.

CBS News said it would capitalize white, although not when referring to white supremacists, white nationalists or white privilege.

Some proponents believe that keeping white lowercase is actually anti-Black, saying it perpetuates the idea that whites are the default race.

“Whiteness remains invisible, and as is the case with all power structures, its invisibility does crucial work to maintain its power,” wrote Eve Ewing, a sociologist of race and education at the University of Chicago who said she’s changed her mind on the issue over the past two years.

Kwame Anthony Appiah, a philosophy professor at New York University, wrote in the Atlantic that capitalizing white would take power away from racists, since their similar use “would no longer be a provocative defiance of the norm.”

The AP checked with a variety of experts and sources in making its decision.

“We will closely watch how usage and thought evolves, and will periodically review our decision,” Daniszewski said. (source)

This article brings up something very concerning, which is the dangerous inclinations towards objectively promoting “institutional racism” not as a trope but in a real way.

I do not wish to try to “compare sides” in this, because there is no “side” save for honoring the dignity of all men versus not doing this, which is the real issue. Instead, language and actions in the name of “justice” are increasingly being used to justify certain forms of racism while denouncing others.

This is about something bigger that using or not using capital letters, or who-said-what-when. It is about a pattern of people- and not all of them black -who feel justified in promoting racism through the use of policies and ideas that is at its core nothing more than a political weapon that manifests in the crudest, most “on the ground” way by encouraging racial animosity. It is in the name of “anti-racism” the direct encouragement of racism for the same reason that racism in the the direct form has been encouraged, which is a wedge to destabilize and grab for power.

There are a lot of problems all around, but what matters is how those problems are dealt with. Unfortunately, what is happening right now is not any real solution to racism, but only to make it worse by rewriting the terms of what makes racism “acceptable” and what does not.

The danger of this is that it is going to provoke a violent reaction from the white bloc, in that feeling and increasingly with small actions adding up to greater ones based on racist logic, such as this one by the AP, that eventually many will just say “I do not care any more” and will react with violence against black people without care for the dignity of their humanity.

All Political Systems Are Meaningless
The Fruits Of Labor
Follow