You are here: Home › The Fruits Of Labor 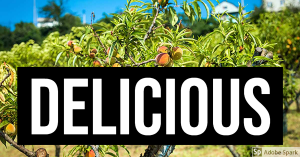 Earlier this summer, I planted a series of trees in my yard because I wanted to make good use of what I have, for contrary to what many do versus what they say, my recommendations that I make in my articles are not imply meant for others to just listen to as though one was being lectured, but are things that, as I believe, can be applicable to most people and that also includes myself. When I recommend something, I do not think of as a lecture to another, but rather sharing what I have learned and understand and what applies equally to me.

One of these trees was a peach tree, for I have noted that in my area, peaches tend to grow exceptionally well. This little peach tree I put in the ground is just about five feet tall and still has probably two more years of growing before it can serious be expected to produce decent quantities of fruit. However, to my great surprise, not only did the tree produce five immature peaches (a common phenomenon), but one of them fell from the tree today, and was not only somewhat ripe, but could be eaten safely.

It was an absolutely delicious peach, and I was very satisfied with it. I am looking forward to it producing many more in the future.

What went into that small tree? I purchased it from a hardware store, and I had to bring it home, which was a challenge, then plant it, and that involved digging in the hot sun, adding fertilizer, and generally being rather uncomfortable. Plus, there is the waiting time, which as noted, is going to be a while until it seriously begins to produce fruit, and that right now was exceptionally early, but by comparison to other things, it is a while for it to start giving forth peaches. However, once it does, it will continue for many years, and by the time the tree is no longer able to seriously produce, I could have easily started another tree to go in its place. The time, while it is frustrating in the waiting period, once it produces will provide much and with little work from man, with most of the work being done by the tree.

The point of why I am writing this is because of the philosophy that I have noted, and which is not unique, but is as old as time, which is that one should work now to prepare for the future and is reflected in the ancient tale of the Ant and the Grasshopper. To get ready now for the future is simply good counsel for anyone. It is similar to planting a tree- it is difficult to do, takes work, and one may have to wait a while for it to bear fruits, but when it does bear fruit, it will be beneficial for all and provide sustenance for years to come and likely open the way for further forms of sustenance to be used. However, if one does not plant a tree- to use the same example -one saves himself on labor now, but with no fruit to be had for the future. The cost is born either way- one chooses to bear it now, the other chooses the future and less certain conditions in which to bear it.

As such, it is my recommendation that based on this example, one does not have to “plant a tree”, but rather to plant other seeds by way of one’s actions so to prepare for an uncertain future, and to do so in such a way that will gather a return instead of being an expense. For example, it is the difference between “prepping” with buying a lot of chicken versus buying a few chickens and learning how to raise them, gather eggs, care for them, and eventually breed or butcher them for meat. It is NOT to be confused with the “prepper” or perhaps more accurately, “hoarder” mentality, for this implies large storages and living off of them without necessarily being able to replenish said stores without assuming the existence of the same systems, while this mindset is a change of lifestyle and personal philosophy as to how one lives, what one values, and how one oragnizes his time, giving himself skills and making himself an active participant in his choices instead of passively throwing stuff into a drawer to use in the future.

Nobody is saying, by the way, that having extra supplies is a bad thing. Likewise, no one should be under the impression that one is going to be more “efficient” than most modern farming techniques. These are also not the purpose, but as noted, it is about being able to give skills that work for the long term that function in unison with any sort of storage.

I will give one more example to leave you with.

A while ago, I knew this man who had the impression of wealth while lacking it in the totality of the world. He was a short, fat, disgusting sort of a person who was obsessed with eating his morning bagel and would think nothing of defrauding another if it meant getting ahead. He fancied himself very intelligent, although he lacked intelligence and even good taste in things such as art or culture. This person knew that I raised chickens, and one day he asked me why I did that, and of course gave his opinion that its cheaper just to buy it and it is a waste of time to raise them. This man likewise had about five acres he lived on that he did nothing with except to hire expensive landscapers keep his grass cut because he liked the way it looked.

this man is exactly the kind of wretched person I speak of- he could easily transform, in a very clean and organized way, his entire yard into a beautiful and productive facility. He would have no shortage of food, and he could help himself and others. But instead, he would rather criticize the man with a few chickens trying to learn a principle because “its cheaper”.

This may may have more land and resources than I, but if there was ever to be a serious disruption to the current way of life- something that I and many, many others have been warning about -he may have the ability to buy some provisions, but ultimately he would suffer terribly because he lacks the fundamental skills to care for himself. Now it is true that having chicken stored, either frozen or canned is good, but if one does not know how to care for chickens, one cannot be able to ensure a necessary supply of it for the future.

Don’t be like that man I met, and while there is always a new skill to acquire or something to learn, one never stops learning, and if one does not know what one is doing, there is no time like the present to start, because all journeys have to begin somewhere.