You are here: Home › Zimbabwean Government Pays Reparations To White Farmers Discriminated Against During Mugabe Rule 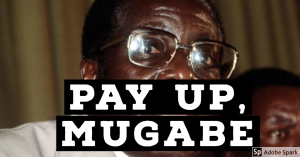 There is a lot of talk about racism in the western world right now, but racism is not dependent on any one race, as it is a human problem and has been with man since the days after Eden. There also is no one form of it, and it can affect anybody, since sin knows no preference save for exploiting a given situation.

During the years of the Bush wars and following the victory of Robert Mugabe’s ZANU, he began a campaign of terrorism and eventually the mass confiscations of land and property from Zimbabwean whites out of his own racialist program. The result of this was a lot of people were killed or had their possessions stolen, and because most of these people were farmers and the black Zimbabweans overall did not know how to farm, Mugabe plunged his country into a state of starvation that caused agony for millions.

Prior to his death, Mugabe begged the farmers he expelled to come back, but they refused. Zimababwe has continued to plead with them ever since to do this, but very few have responded, for naturally they do not trust the current government. However, in a very interesting move that is most likely a part of this drive to bring back the old farmers, those farmers who were discriminated against are going to collect reparations from the Zimbabwean government, who also has said that if they are interested, the government will help them secure farmland to farm again.

Zimbabwe’s government on Wednesday signed a deal with former white farmers to pay them billions of dollars in compensation roughly two decades after they lost their land in often violent invasions.

But because the government does not readily have the money, the farmers will be part of a team tasked with raising the cash.

According to the agreement, signed at President Emmerson Mnangagwa’s official residence and witnessed by representatives of the former farmers, the $3.5 billion compensation is not for the land but for infrastructure such as wells, irrigation equipment and buildings. The farmers initially wanted over $5 billion.

The full payment is expected to be done within five years. But it is unclear if the former farmers will receive the money given that Zimbabwe is financially troubled and burdened with a huge debt.

The government will borrow on international markets and the farmers will be part of a “joint resource mobilization committee” tasked with raising the money, according to the agreement.

Mnangagwa, who took power in 2017 after Mugabe was forced to resign, has encouraged former white farmers to apply for pieces of land.

The president said the latest developments have brought closure. (source)

This sort of reparations is justified because it is a recent, historically speaking, event. The people who were affected by the ZANU are still alive- they can remember life before the ZANU, and life after. This situation is completely different from the “reparations” crowd in the US consisting largely of an Afro-American bloc, for while it is true that the ancestors of many American blacks were slaves, the current American blacks alive today all the way to their great-great grandfathers and beyond were not slaves, so while it may be a part of collective historical memory, they were not directly affected by slavery and neither were the more recent four or five generations of people. They have no claim to reparations for something that happened to a distant ancestor, for if one takes this logic, what is to say that the Italians could not make claims against the Swedes (Goths) for the sacking of the Roman Empire, or the Chinese against the Mongols for the invasions of China (Yuan dynasty), or even back to the Dravidians making claims against the Iranians (Aryans) for invading India?

It was a horrible thing what happened to the white farmers of Zimbabwe, and that should not be forgotten. However, to the credit of the Zimababwean government, and while it is certainly being made for political reasons, it is good that something is being done for the farmers, and that perhaps by doing this, there can be a start of reconciling a real peace between white and black Zimbabweans to the point that, working together they can make Zimbabwe into what it used to be, which was a food-producing power of Africa.