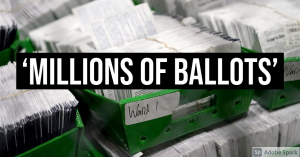 The Washington Times reports on this as about two million ‘ghost voters’ have been discovered in twenty-nine states.

The study found that 352 U.S. counties in 29 states managed to have 1.8 million more registered voters than eligible voting-age citizens.

Sit back and enjoy the show. Bring popcorn too, because it’s time to enjoy it.

Federal Judge Criticizes The US Postal Service For Losing Track Of Hundreds Of Thousands Of Ballots, Some Of Which From Pennsylvania, Michigan And Wisconsin
Donald Trump Is Now Suing Michigan, Pennsylvania And Georgia
Follow