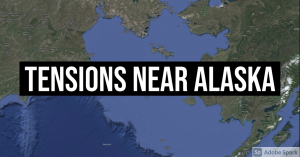 With Russia trying to rebuild the USSR and assert herself as a major global power again, this has come with some new attempts to bolster and assert herself. However, in Russian fashion, while she is excellent (better than the Americans and Anglos) at bluffing, she is poor at lying and because of this she can do things that are openly objectionable for all to see and call out. Such an example of the latter happened recently according to the New York Times, where the Russian military began harassing American fishermen operating directly in American waters in Alaska.

The crew of the Bristol Leader was laying out its long cod-catching line well within U.S. fishing territory in the Bering Sea when a voice crackled over the VHF radio and began issuing commands: The ship was in danger, it said, and needed to move.

The warnings, coming in a mixture of Russian and accented English from a plane buzzing overhead, grew more specific and more urgent. There was a submarine nearby, the voice said. Missiles were being fired. Leave the area.

Other U.S. fishing vessels that were scattered over 100 miles of open sea were getting similar messages. Capt. Steve Elliott stood dumbfounded on the trawler Vesteraalen as three Russian warships came barreling through, barking orders of their own. On the ship Blue North, commands from a Russian plane led Capt. David Anderson to contact the U.S. Coast Guard, wondering how to protect his crew of 27.

“It was frightening, to say the least,” Anderson said. “The Coast Guard’s response was: Just do what they say.”

The Russian military operations in August inside the U.S. economic zone off the coast of Alaska were the latest in a series of escalated encounters across the North Pacific and the Arctic, where the retreat of polar ice continues to draw new commercial and military traffic. This year, the Russian military has driven a new nuclear-powered icebreaker straight to the North Pole, dropped paratroopers into a high-Arctic archipelago to perform a mock battle and repeatedly flown bombers to the edge of U.S. airspace.

Lt. Gen. David Krumm, commander of the multi-force Alaskan Command and also the 11th Air Force, said that while the Arctic used to provide a natural buffer between the nations of the far north, the new possibility of ice-free passage has changed that.

“We’re at a pivotal point in the timeline of the Arctic,” he said at a recent convention of the Alaska Federation of Natives, many of whose members reside in remote villages scattered throughout the northern region.

Krumm said the United States would need to invest in operations, equipment and training to prepare for the changing environment. Alaska, he said, has historically been viewed as a base from which to project American power elsewhere in the world, but the mission is changing.

“What we have to do now is be prepared to fight here and defend here,” he said. (source)

It is not as though the US is unaware of what is going on. However, it seems here that she may be doing what the US does very well, which is to allow her enemies to do things intentionally, yet not respond and just note them. Then, after enough time passes, to pull out her “list of notes” and put them as a giant list of grievances and use it as a justification to respond very violently and swiftly to her advantage, and because they will be so documented, to prevent the other side from being able to deny or hide their actions, noting as I said above, the Russians are absolutely terrible at lying.

The US knows very well that a major war with Russia is coming, and given what I have seen, that she knows one of the theaters will be in the Arctic. Most of this from what I have seen will probably be located from Norway to the Novaya Zemlya region, but because of the proximity of Russia to Alaska, it may include that area, possibly Alaska, Chukotka (the Russian borderlands near Alaska) and other areas in the “Russian Far East”, especially since Russia is (and not with much success) attempting to carve out her own path through the ice of the north pole as a new transportation route to the Far East, knowing that she is being economically cut out of much of the railway developments taking place that are going from Turkey to the Hindu subcontinent and then to the Far East.

The trends of increasing militarization in the northern regions with Russia are going to be major trends to watch for, since they will be critical steps on the road towards a global war.

Justice Alito: COVID-19 Is A ‘Constitutional Stress Test’ That The US Is Failing
Thoughts On The Nature Of Evil
Follow