You are here: Home › The New Weapons Of War Are Coming As The US Military Develops Weaponized Laser Beams 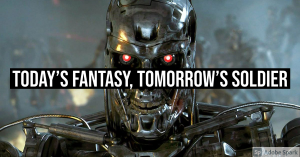 In the original “Austin Powers” film, the character Dr. Evil asked for “sharks with frickin’ laser beams attached to their heads” in order to kill Austin Powers.

While this scene is ridiculous and funny, the concept of using “laser beams” as a weapon is not new. However, with the rise in technology of robotics and AI, The Drive reports that the US government has been working on the ‘weapons of the future’, which seem to be energy-directed weapons such as laser beams.

All the microelectronics and iPhones and so forth, were starting to be drilled and the touch screens were being scribed, and all this whole industrial space opened up, and the reason was that these fiber lasers were very efficient at converting electrical power to optical power. The beam quality that came out of the fiber-laser, meaning the ability for that beam to be focusable, to provide a high-intensity spot to do things, like melt metal and drill holes, the beam quality was very high. So, all of a sudden, the industrial space really opened up and the development of high-power fiber-lasers really, really took off.

That was particularly interesting, except for the fact that the power out of a fiber-laser doesn’t scale to a weapons class, right? It’s one thing to cut metal that’s centimeters away, it’s another thing to take out a mortar at two kilometers. So, the innovation that changed the game in the last five years or so, Lockheed Martin was a real leader or the leader in this innovation, and the innovation involved bringing together the technologies from fiber-optic communications and the technologies of high-power lasers for industrial applications to figure out a way to scale fiber-lasers to weapons class power.

The way that’s done is, instead of just building a single laser at 50 kilowatts or 100 kilowatts or something like that, we are actually taking individual fiber-lasers and combining the outputs of the beams into a single high-power beam, and we do that using a technique we call Spectral Beam Combination… Fundamentally, what we did was we took something, if you’re familiar with wavelength division multiplexing in telecommunication—how to break up the spectrum that’s available to you into many different laser-lines and send all that light down a fiber to increase your communications bandwidth. So, all of a sudden, we took a large number of fiber-laser channels, all closely spaced in wavelength or in frequency, and then by reflecting those beams off an object. We could call it a grating, or you can think in your mind of it like a prism, the beams all combine into a single output beam. Patty always loves this analogy I use, which is Pink Floyd’s Dark Side Of The Moon record cover.

So, if you look at that prism, there’s a white light beam that comes into the prism and it breaks up into the colors of the rainbow, you could run that in reverse, you could have a whole bunch of beams that cover the different spectrums, and if you put it through the prism, they all combine and output a single beam. We call it kinda the ‘reverse prism effect.’ So what all of a sudden we were able to do was to scale laser power in a modular way. Instead of just trying to build a bigger and bigger laser, we’re actually scaling by adding lasers up.

Think of it as a mainframe computer breaking up into a supercomputing cluster. So, instead of just building a bigger device, we’re combining in parallel. And so, what that enabled us to do is build a high-power laser that’s scalable by adding modules that delivered a weapons class beam, but with very high beam qualities. (source)

The rise of the laser beam is a major trend to watch for the future. To that, I will have to add a trend that is going to make people very upset, but that is the trend of the decline in the gun as, yes, an obsolete tool of war.

Now guns have been around for centuries. They are going to be around for the future. What I am saying is, for war weapons, they may end up in the future taking a “second place” as a backup to energy-based weapons systems that are more powerful and more useful.

What is a gun? It is a little machine that shoots a piece of metal contained in a manufactured cartridge stuffed with an explosive at somebody. The purpose is to make holes in stuff so it dies or breaks. That is how a gun works.

The process of gunmaking is very intense and time-consuming. Making ammunition is even more time-consuming and dangerous. This is why people always talk about making guns or “reloading” ammo but never actually drawing the cases themselves, let alone making the powder or primers themselves, because most of the process is a highly-intense one involving metal forming and then moving explosives with one’s bare hands. One can cut a gun from metal with some effort, and one can “reload” ammo as a hobby, but deep-draw metal forming and explosives production is almost entirely done in factories.

The ammo manufacturing process. It is very labor intensive.

Metal pieces going through a human body hurt. But metal pieces do not go through metal as easily, and depending on how tough the metal is and the strength of the bullet, possibly not at all. This was the “lesson” from the Terminator film series- that guns, while they can “slow down” a robot, cannot actually stop it.

Now I do not want to “take lessons” from movies, but for a film, Carpenter captured the essence of the a man fighting a robot- it is very hard with a “gun” because that is a physical lump of metal that does not really affect the electronic components of the machine.

Shoebat.com has warned that just as the machine gun and poison gas transformed World War I, just as the atom bomb did the same for World War II, so it is likely that computers, artificial intelligence, and robots will define a third major global conflict, and weapons systems have to be developed to address this. A human being going up against a robot with a submachine gun in the future- and I speak of the near and not distant future -may be as outdated a concept as 19th-century British battle marching tactics against machine gun fire that resulted in the near complete annihilation of all boys born in 1898 during World War I.

If the soldier does not adapt his weapons to the new weapons that WILL be used by his enemies in the future, he will end up just like those millions marching from the trenches at Verdun and other horrible places over a century ago and who are only memories now in a history textbook. If one though fighting other humans was bad, it is a fearful thing to consider what it may be like facing a chunk of metal, wires, and chips on the battlefield who cannot feel pain and is trained to kill with greater efficiency and accuracy than a human.

As a trend for the future, the gun is likely going to “decrease” in the long-term sense from the battlefield, and a sort of “laser gun” or other form of energy type weapons will replace them.

Supreme Court Declares: ‘Churches In New York Do Not Need To Follow Cuomo’s Anti-Covid Restrictions’
Turkey’s Aspiration To Create Its Own NATO
Follow