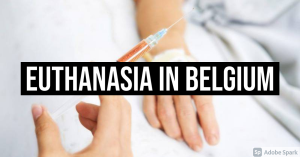 Euthanasia is murder. There is no other way to put it. That said, there are a lot of people who wish to deny this. As such, it has become common in many “civilized” nations, including the US, to allow euthanasia for people who are sick and want to kill themselves. However, as many people have warned, this disturbing and evil trend has another side to it, and that is, eventually, euthanasia will end up not just murdering somebody who didn’t want to kill himself by accident, but a trend would form of euthanasia as a means to ‘get rid’ of people deemed undesirable under the name of the practice.

This trend appears to have reared its ugly head in Belgium, as Belgian authorities are investigating not just one, two, or even three, but ten illegal euthanasia cases that have taken place at what has been traced to the hand of two doctors, as the Christian Post reports.

In a nation with one of the most permissive legal regimes in the world, officials say they were tipped off by a letter to the De Standaard newspaper, which was penned anonymously, according to BioEdge Sunday.

The letter recounted how a family member who died two years ago was told that it was to be presumed that euthanasia was the cause of death. The doctors that administered the euthanasia did not inform the family, an experience the family described as “traumatic.”

Informing the family if someone wishes to be euthanized is not legally required in Belgium but some medical groups recommend it.

The two doctors who were named in the letter are associated with nursing homes in the Emmaus group — a movement that was founded in 1949 by Abbé Pierre (Henri Marie Joseph Grouès), a French Catholic priest, with the goal of helping poor and homeless people and refugees. But the cases being investigated were part of the doctor’s private practices, according to Inge Vervotte, head of the Emmaus group. The investigation into these two doctors reportedly began over one year ago.

Wim Distelmans, a professor and the chief euthanasia overseer in Belgium, said that his committee is supposed to be notified about each case of euthanasia that happens in the country but that does not always occur.

“Some doctors are happy to admit that,” Distelmans said.

“What doctors write down, we naturally take for granted as true,” he said.

“Apart from that, and rightly so, everyone is free to file a complaint with the public prosecutor’s office if they think they have reason to.” (source)

There is a saying- “one time is an accident, two is a coincidence, three is enemy action”, meaning that repeated events do not just happen by accident.

Eugenics itself has been an issue in Europe for a long time, and it has only become worse as what little remains of religion has disappeared. Europe is pagan, and it is not a surprise that with a return to such “values” also comes the consequences of paganism, such as eugenics and other forms of murdering “undesirable” or “weak” people.

It will be interesting to see which people have been murdered. Were the all Belgian citizens, or were they also foreigners? Likewise, were there particular medical conditions they had, an the biggest question, why did, in their words, the doctors who carried out these practices do them?

A society that murders its weakest members in the name of expediency or trying to “improve” itself is a society that does not have a long-term future. People are what make up a society, and eugenics causes more problems than in solves. In the case of Europe, it is a poor substitute for their rejection of God and trying to fix social problems without addressing their own issues first.

As with many things in life, man is the cause of his own problems. This is no different than what is happening here in Europe. The major difference however, is that Europe is choosing death before addressing her own problems.