You are here: Home › Boko Haram Slaughters 110 People In Worst Attack Yet This Year 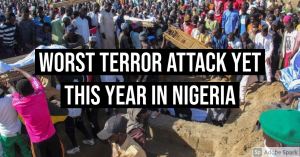 One of the trends driving migration from Africa is anti-Christian violence, especially by various Muslims group as the antagonists. Nigeria has seen continual fighting between Christian and Muslim factions, and according to a report from the Christian Post, the terror group Boko Haram has launched its deadliest terrorist attack yet this year that has left 110 people dead and many more wounded.

Armed men on motorcycles, believed to be from the Boko Haram terrorist group, killed at least 110 farmworkers in rice fields in Nigeria’s conflict-hit Borno state. A United Nations official called it “the most violent direct attack against innocent civilians this year.”

“I am outraged and horrified by the gruesome attack against civilians,” Edward Kallon, the U.N. resident and humanitarian coordinator in Nigeria, said about the assault in the village of Koshobe and other rural communities near the northeast city of Maiduguri on Saturday, according to Bloomberg.

“At least 110 civilians were ruthlessly killed and many others were wounded in this attack,” the official said.

Kallon feared that several women may have been kidnapped.

“I call for the perpetrators of this heinous and senseless act to be brought to justice,” he added.

Boko Haram and its faction, the Islamic State in West Africa Province, are known to be active in the area.

Nigerian President Muhammadu Buhari condemned the killing of “our hard-working farmers by terrorists in Borno state,” according to Al Jazeera.

“The entire country,” he said, “is hurt by these senseless killings.”

Dozens of the bodies were taken a little more than a mile away to Zabarmari village for burial on Sunday, a resident Mala Bunu, who took part in the search-and-rescue operation, told AFP. (source)