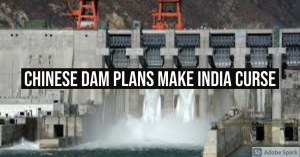 China and India are in a very poor state of relations right now as the two great nations with the largest world populations and third and fourth strongest militaries have been battling with each other through skirmishes on the border regions of the two nations. The accusations have flown and bodies have fallen, and at the current rate, in a future global conflict, it will be India and China fighting in the Himalayas and Central Asia for control. But right now, the conflict is limited to mostly internal squabbling.

Noting that China has a history of angering her neighbors, the nation just took another step towards making not just India, but Bangladesh, Myanmar, and Bhutan hate her more than they already do with plans to build a massive dam on the Brahmaputra river that would shut out a large amount of water from India.

The world’s highest altitude river, cutting through the Tibetan plateau and rugged terrain along the Chinese-Indian border, carries troubled waters amid a new era of border tensions between the two Asian giants.

Those tensions are set to rise with Beijing’s aggressive new plan to build mega-hydropower plants and dams across the 2,900-kilometer Yaluzangbu River, or Yarlung Tsangpo, with work on the projects scheduled to take 15 years.

The projects are unlikely to break ground anytime soon but Beijing’s move has caused trepidation in New Delhi over water security in the downstream Brahmaputra River basin in its northeastern state of Assam and nearby regions.

The strategically vulnerable Indian states border Tibet in the north and are connected to India’s main parts by the thin Siliguri Corridor, also known as the Chicken’s Neck, near Bangladesh.

China Energy Daily, a paper under the People’s Daily umbrella, revealed that the Yaluzangbu’s downstream valley off the northern slope of the Himalayas, in particular at the so-called “Great Bend” canyons, boasts the world’s richest hydropower resources. It noted that the river’s resources are still largely untapped and that the Yangtze that fuels the Three Gorges Dam pales in comparison due to its low downstream elevation.

Hong Kong’s Ming Pao and Singapore’s Lianhe Zaobao newspapers previously reported that China aimed to erect a giant dam near the Great Bend area that would be at least twice the size of the 3,335-meter-long, 185-meter-high Three Gorges Dam.

China Power Construction Corporation did not respond to Asia Times’ e-mailed inquires about the proposed dam. At least 11 small-to-medium hydropower plants, however, have been up and running along the Yaluzangbu since 2010.

In the past decades, many other grand plans for dams in Tibet have been vetoed or otherwise disappeared in a region rife with racial tensions and geopolitics. It remains to be seen if Beijing’s push this time will actually materialize. (source)

Dams are often a political thing, especially where one building a dam could seriously impact another nation. China, with her long history of selfishness, corruption (going back to before Confucian times), pollution, and mismanagement, if she puts up a dam on this river, there is a strong chance that not only will she just shut India out of any water access from it, but also may end up so mismanaging the water that she will get more problems than benefits returned from the dam.

One only needs to look at the disaster that is the “Three Gorges Dam” in northern China, for aside from the fact that, in accordance with China’s history of poor construction techniques, the dam did not produce massive amount of hydroelectric power as promised, but a paltry amount while at the same time destroying large amounts of valuable farmland and displacing farmers, which given China’s large population and inability to feed her people has inclined her to increase her dependency on foreign food imports. The Dam was and continues to be hailed by the CCP as modern wonder when all of the results from it show that it has been an utter disaster.

This could happen, in some form, with this new dam. It will likely cause more waste than help, and at the same time, anger India and her neighbors to hate China more than they already do.

China may be a ‘rising power’, but those powers often fall very hard. In her case, China is increasingly finding herself alone in the world and without allies at a time she needs them more than ever. Ideally, while she may not be ‘friends’ with India, she could try to be at peace with them, but her consistent decisions speak to the contrary. In the future, China will likely find herself fighting Japan in the northeast, India in the southwest, rebellions in southeast Asia, rebellions internally in East Turkestan and Inner Mongolia, and the US as well as NATO from without, as Germany and France, while they may have issues with the US, also want to revive their empires too, and in addition, the British military will also likely play a role. Russia will be consumed with internal affairs and also does not like China, to their help is likely going to be negligible.

China needs either friends or “neutral” nations toward her, and by her actions, she is getting neither, but only generating hate against her. This does not sit well for her future.