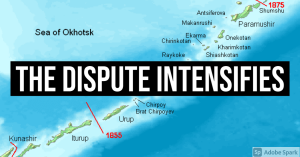 Almost two years ago, I wrote a piece here on Shoebat.com about a disputed archipelago between Russia and Japan. The Russian call them the Kuril, the Japanese the Chishima, but the small islands that lay between the southernmost point of Sakhalin Island in Russia to the tip of Hokkaido in Japan are very important for geopolitics and the military-industrial complexes of both nations since they contain, assuming current rates of use, at least seven centuries of rare-earth minerals in them.

You can read the full article here, and I recommend you do as a primer of if you have read it already, to review it so to understand the serious nature of this dispute. It is not a fight over rocks in the ocean, but a fight over the raw materials to built the components to major computers and electronic parts for a coming war.

Having noted this, Russia just did a vey aggressive move as she has sent missiles to be placed in the Kurils, thus causing significant anger with Japan.

The Russian Defense Ministry’s TV station, Zvezda, reported that the air defense missile systems were deployed on Iturup, one of the four southernmost Kuril islands.

The new deployment marked the latest move in a continuous Russian military buildup on the islands, which has included stationing advanced fighter jets and anti-ship missiles there.

Japan asserts territorial rights to the islands it calls the Northern Territories. The Soviet Union took them in the final days of World War II, and the dispute has kept the countries from signing a peace treaty formally ending their hostilities.

Decades of diplomatic efforts to negotiate a settlement haven’t produced any visible results.

Former Japanese Prime Minister Shinzo Abe spent a lot of time and effort in the hope of negotiating a solution during his nearly eight years in office but scored little progress.

This kind of aggressive response from the Russians is typical, but also carries a negative aspect in that it tends to backfire on them long-term. People don’t like being bullied or feeling like they are being bullied, for right or wrong, and the Russians simply sending missiles into a sensitive area concerning Japan is not going to go well with Japan. The asiatic power will stay silent, but if anything, it is only going to drive her (for now) closer to the US and further promote her rapid militarization.

Russia’s population is about 140 million people. Japan is 125 million, meaning there are almost as many people in Russia as there are in Japan. While both nations are suffering declines, remember that Japan has taken over in the past half of Siberia, with far less of a population and a far greater Russian population, and occupied it from 1905 until she voluntarily withdrew in 1920.

Japan is a major power, and while China is “rising”, China is hated by all of Asia and many people in her own nation (mostly of Mongolian or other Turkic stock), plus her biggest rivalry is with India. It is unlikely except in name that China will help Russia, and likewise, Russia does not trust China not to walk into and seize Siberia from her.

Russia is trying to “assert” herself on a global scale, but he bolder she acts, the more it is a reminder that she is rotting from within amid many serious an currently unsolvable structural problems related to long-term poor decisions, mostly stemming from the Soviet period, and which she is attempting to repeat, as I have reported on many times.

As a trend, one should not expect too many loud protest from Japan. In fact, one should expect silence, but that is what is most dangerous, for it is in the silent, cold, blackness of the Japanese response that she will forge her weapons of war and conspire to revive her ancient ways that one day, when no one expect it, she would raise the Japanese flag of the rising sun once again beneath a horrible scene of bloodshed, destruction, and conquest as the soldiers of the Emperor said across the Sea of Japan and march into China and Siberia once again.