You are here: Home › US Is Officially Training For A War With “Hard Targets” 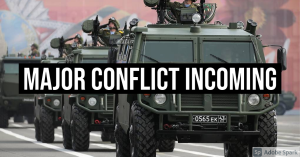 About fifteen years ago, I was sitting with a person who I had done work with as a part of my academic studies who became a friend. She is an older woman, but was very involved in political circles with powerful people. We were talking about the future, and she said that a friend of hers in a powerful position told her something that she could not believe or understand on her own but accepted because she trusts this person, and this is that the greatest threat to the US is Russia and the US has began to aggressively prepare for a conflict with her.

I did not understand what she meant at the time. However, having seen the events of 2007, the Euromaidan in Ukraine, the migration crisis, and the rise of nationalism as well as other political events, it is clear that the end of the Cold War and the breakup of the USSR was but preparation for a coming conflict with Russia instigated by the US and Russia alike. There is no ‘innocent’ party in this, because points can be made about both that point to guilt.

That said, The Drive reports that US Special Operations forces are now officially training for a war with “hard targets”, of which Russia and China fall into this category.

s the U.S. special operations community, as a whole, works to better prepare itself for higher-end conflicts against potential near-peer adversaries, the Army says it will train and equip company-sized units of Special Forces personnel, better known as Green Berets, focused on taking down “hard targets.” This plan notably comes months after the Pentagon included a request for funds in its most recent budget request to build the secretive Joint Special Operations Command a specialized training facility where its operators could practice attacking “complex, hardened facility targets.”

The HTD’s activities in this fictional scenario fall under the general definition of “special reconnaissance,” a special operations forces mission set generally defined as operations to covertly gather intelligence in denied or otherwise sensitive areas. In this case, the target can be considered “hard” given its sensitive nature as an ostensibly civilian facility operated by one country in a third country, neither of which the United States is at war with.

“Hard targets” could also certainly include hardened targets, such as critical command and control nodes, facilities housing weapons of mass destruction (WMD), and other high-value sites that may well be housed inside well-protected bunker complexes, primarily below ground. A number of major potential U.S. adversaries, including North Korea and Iran, as well as near-peer competitors, such as Russia and China, are increasingly turning to deeply-buried infrastructure to help protect critical assets from stand-off attacks, something is of particular interest here at The War Zone.

Green Berets tasked with these kinds of missions would definitely benefit from more regular training in the tactics, techniques, and procedures necessary to carry them out. In addition, given the expanding anti-access and area-denial capabilities that more capable potential adversaries, such as Russia or China, have at their disposal, it would be important for the Army Special Forces elements to coordinate with units, including special operations units from other branches, to be best postured to actually make it to the target area successfully in the first place. (source)

This is not talking about a ‘weak’ target, such as an Afghanistan or Iraq, but fighting against serious military powers where death is going to be a reality. This has the potential for not just a few thousand soldier deaths, but deaths in the hundreds of thousands, possibly even in the millions.

These are the levels of casualties that may be seen in a “hard targets” type scenario when facing against a Russia or China. The same can be said in reverse if either or both nations were attacking the US, for the US would not go down without a major fight, and the violence would be horrendous.

This is likewise why Special Operations are being discussed- because it is a way to try and make a target easier to hit before more direct military action, which also helps to reduce casualties. The same can be said of robotics- the future soldier will involve robotics because robots just break, and they do not die. One only needs to look at the recent Nagorno-Karabakh conflict to see where Azerbaijan by way of Turkey used drones to annihilate the Armenian positions and defeat them quickly, whereas if left to normal circumstances, the fight would have been much more difficult for the Azeris.

This is not the “post Soviet world” anymore. We are now close to living in a “post-dollar” world, and with the American empire in decline, the dollar falling apart, the economic chaos that comes from this will cause political chaos, and the major militaries of the world are aware of this and making steps to prepare for the future.

Russia in a major war is going to fight hard because given the demographic problems, economic problems, and state of her nation, Russia potentially could go through a historical breakup and be rendered, on a global scale, impotent. She does not want this to happen and is likely going to do all she can to stop it from happening. China is a rising power, but is also weak, and does not want to see her opportunities taken away by the Americans or any other group.

Likewise, in this context, the trends that I have discussed remain constant. There will be a lot of training, but ultimately, the winner will be the one who embraces and develops the new military technologies, of which the most important ones are going to be the use of AI, and biotechnology either as robots serving as soldiers or as soldiers who capabilities are augmented by technology. This is what the machine gun was to World War I, and the nuclear bomb to World War II.

The biggest losers, it seems, may be the common men, especially the recent migrants to Europe, who will likely be used and then openly destroyed as nothing more than pawns in a game of power.