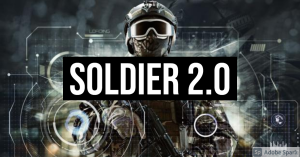 Shoebat.com warned you that the future of war would be robotics, AI, and a merger of man and machine up to and possibly including something like what was seen in the Terminator film series. As a continuation of that trend, NBC News reports that the US military has declared that China is experimenting on soldiers with genetic editing, trying to create “super soldiers”.

John Ratcliffe, the director of national intelligence, included the explosive claim in a long Wall Street Journal op-ed in which he made the case that China poses the pre-eminent national security threat to the U.S.

“There are no ethical boundaries to Beijing’s pursuit of power,” wrote Ratcliffe, a Republican former member of Congress from Texas.

His office and the CIA did not immediately respond to requests to elaborate on the notion that China sought to create “super soldiers” of the sort depicted in Hollywood films like “Captain America,” “Bloodshot” and “Universal Soldier.”

Last year, two American scholars wrote a paper examining China’s ambitions to apply biotechnology to the battlefield, including what they said were signs that China was interested in using gene-editing technology to enhance human — and perhaps soldier — performance.

Specifically, the scholars explored Chinese research using the gene-editing tool CRISPR, short for “clusters of regularly interspaced short palindromic repeats.” CRISPR has been used to treat genetic diseases and modify plants, but Western scientists consider it unethical to seek to manipulate genes to boost the performance of healthy people.

“While the potential leveraging of CRISPR to increase human capabilities on the future battlefield remains only a hypothetical possibility at the present, there are indications that Chinese military researchers are starting to explore its potential,” wrote the scholars, Elsa Kania, an expert on Chinese defense technology at the Center for a New American Security, and Wilson VornDick, a consultant on China matters and former Navy officer.

“Chinese military scientists and strategists have consistently emphasized that biotechnology could become a ‘new strategic commanding heights of the future Revolution in Military Affairs,'” the scholars wrote, quoting a 2015 article in a military newspaper.

One prominent Chinese general, they noted, said in 2017 that “modern biotechnology and its integration with information, nano(technology), and the cognitive, etc. domains will have revolutionary influences upon weapons and equipment, the combat spaces, the forms of warfare, and military theories.”

VornDick said in a phone interview that he is less concerned about the battlefield advantage such research might provide than he is about the consequences of tampering with human genes.

“When we start playing around with genetic organisms, there could be unforeseen consequences,” he said.

Representatives of the Chinese government did not immediately respond to a request for comment. (source)

Now this is a real concern. However, as Shoebat.com has reported many times, the US military has been involved in this for many years, probably longer than the Chinese, and in spite of what the US says, the US is likely more advanced than China by far. Germany is in a similar situation.

Second, another trend I have noted is how the Chinese utterly fail to produce things that do not fall apart. They serve plastic pellets as rice coated in liquid human feces as oil, in buildings where the cement is powered and can be pulled away from the steel with a simple hand tool, where buildings collapse in ghost cities, and worker safety is a joke as people die on the job daily in ways that would make OSHA’s collective brain explode.

Does one really believe that Chinese biotechnical experiments will actually work out well, and not end up creating some chimera that does more damage to them than to their enemy? Just look at COVID- if the Chinese cannot keep a simple virus under control and prevent it from getting out and causing global problems in what is supposed to have been their most secure lab, it does not speak well to their future about keeping control over strange biological experiments.

Third, and related to the first trend, is that whoever masters this technology is going to be the most likely winner in a future war. So far, the US, Germany, and Japan are the leading bloc, with probably Russia second and given her relations with Germany and NATO, the possibility of Turkey in this too, and then China and possibly India third.

China is going to be a threat- make no mistake about this. But China also needs allies or at least, neutral parties who will not fight her. Instead, she has no allies really except Pakistan for practical purposes, and to that, Pakistan is not reliable. Instead, she is surrounded by India in the southwest, Japan to the northeast, a non-helpful ally in Russia to the north (and possibly an enemy if Russia fears China gets too close to Siberia), rebellion all across southeast Asia, a belligerent US, and opposition from France, Germany, and the UK, including possible military action from at least one of them.

While she is making robots, or at least trying to, one area that she continues to fail in is being able to feed her own people without relying on imports from the US and other nations. If the pork you eat and the soy you consume come from your enemies, or your food produced from nearby countries do not like you (such as southeast Asia), one cannot expect to just wage war without major consequences, for one of the first things to be stopped would be food supplies, and starving people do not make for obedient citizens nor soldiers, especially if an enemy offers their pain-stricken and empty bellies a bite of food to eat.

In other words, China has a long ways to go, and her trends to war must be measured against her historical trends of mismanagement that consistently bring about her eventual undoing and conquest by foreign nations.

Since 2015, 11,500 Christians Have Been Slaughtered By Muslims In Nigeria
US Is Officially Training For A War With “Hard Targets”
Follow