You are here: Home › “Religious Jewish Man” Arrested After Trying To Burn Down Catholic Church On The Mount Of Olives In Israel 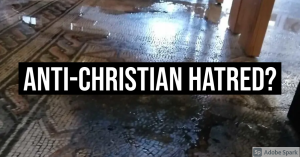 According to the Jerusalem Post, a Jewish man was arrested after trying to burn down a Catholic Church on the Mount of Olives in Israel.

Police arrested on Friday a religious Jewish man after he set fire to the inside of a Roman-Catholic church called The Church of All Nations located on the Mount of Olives in Jerusalem.

The man is suspected to be a right-wing man who set fire to the holy site on the basis of a hate crime, but no details have been confirmed.

No injuries were reported, and the damage was limited. In videos of the scene, sections of the burnt floor can be seen alongside a number of lightly charred pews.

Wadie Abunassar, Advisor to the Assembly of the Catholic Ordinaries, said that they are “grateful to God” that there was little damage done and that no one was hurt. He also thanked police for their swift work to arrest the man who caused the damage.

“We hope for a serious investigation, especially with regard to motive, because if the motive is truly suspected to be racist, I believe many conclusions should be drawn,” Abunasser said.

He said that the conclusions should not only be drawn “in the field of security, but also in education because it seems that people here don’t really promote coexistence base on mutual respect of all faithful in the Holy Land.”

The church, also known as the Basilica of the Agony, was built on the site of the Garden of Gethsemane which enshrines a section of bedrock that is believed to be the place that Jesus prayed on the night of his arrest, according to the Foreign Ministry. (source)

The fact is when things like this happen, it is a time to talk about the matter so it can be put to rest. Many credits to the Jerusalem Post and for that matter, any Jews of good will talking about this and refusing to accept it, and for the prompt action of the Israeli government in arresting the perpetrator. Indeed, Jews are people and they have free choice like anybody else, and as always, one must desire for oneself what one desires for his neighbor. Hating Jewish people for existing is as wrong as it is hating other people for existing, because man is made in God’s image and likeness. So to that, anybody who has opposed this in good faith, especially who is Jewish, it is much appreciated and important because it is the morally right thing to do.

But that said, where are the cries of the Jewish activists? Where is the screaming about ‘religious persecution’? Where are the angry street demonstrations, demands for justice, and talk about events like this being another step to “the 1930s”? Indeed, if this was the reverse, then major Christian activists would have said something to the matter and condemned it, regardless if it was against a Jew, Muslim, or even other group. Likewise, where are the groups of black-hatted donned “rebbes” condemning what happened?

From what I have seen, there has been practical silence on the matter from these same activists. Thankfully the Church was not burned down, but if this was the reverse, or anybody doing anything to a Jewish place of worship, the screaming from these activists of the “unforgivable sin of anti-semitism” would attempt to drown out any evidence-based investigation of the matter.

But when it comes to the curious silence of many, not out of ignorance but with full knowledge of the matter, especially in major positions of leadership, the answer to this is clear, and was expressed well by the founder of Islam, Mohammed, when he said as is recorded in Islamic Sacred Tradition when asked about a question to which one does not give an answer, “[Their] silence is consent”, for indeed, if one would refuse to condemn the burning of a Church for no apparent reason other than hate, it is no different that those among the Jews who cheered the American Jewish settler Baruch Goldstein who gunned down innocent Muslims for no reason other than racialist hate, for there is no group exempt from the moral law.