You are here: Home › Police Rescue Thirty People From Cartels In The United States 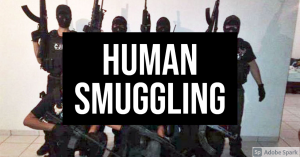 Shoebat.com has reported often times that the infamous cartels of Mexico are known for abusing people in the horrible drug wars that claim dozens of lives each day. But now, not only are the cartels spreading deep into the US, but are showing signs, continuing on an existing trend, of diversifying their operations into other areas such as human trafficking. According to the Christian Post, thirty people were rescued from drug cartels by Houston police after it was discovered they were being held in a house in the city.

Police discovered 30 half-naked illegal immigrants held by cartels in a Houston house last week. The house’s captives included 29 men and one woman. Investigators said most of the people came from Cuba, Central America and Mexico.

On Thursday, one man wearing only underwear escaped the house and ran through the street, shouting that he had been kidnapped, according to Telemundo.

Cartels often take the clothes of people they traffic as a control technique, Pastor Robert Sanchez told The Christian Post. Sanchez leads El Tabernaculo Church near the border and often works to help illegal immigrants trafficked by the cartels.

“They might do that to make sure they don’t just walk out,” he said. “It is a very heartbreaking situation to hear about because honestly, I have not figured out what Christians can do about it yet.”

When cartels bring desperate migrants across the border, they isolate them from people who can help, Sanchez said. After one to two months of dangerous travel, cartels cram people into “safe houses” until they can cross the border. Once on the other side, the cartels jam them into American “safe houses.”

“The majority of these people said they were kept in Brownsville, Texas, for some time between two days and a week,” and that they were kidnapped and taken into the Houston house, said Police Commander Jonathon Halley to Telemundo.

Human traffickers brought the people over the border, Halley said.

Normally, cartels pack dozens of people into a house for a few days, feeding them fast food and canned goods, according to Sanchez. In the past, cartels have hidden people on rental properties that Sanchez owns until he discovered them and called the police. On some occasions, the pastor has paid ransoms to cartel members to release illegal immigrants to their relatives.

Women who try to illegally cross the border often pay worse prices, he noted. Cartel members often rape women who pay them to travel across the border. The one woman in the Houston group was probably treated as sexual currency. (source)

It is possible that this trend will increase with the continued attempts to legalize drugs in the US, which in time will undercut the profitability of the cartels and force them to diversify into other illegal businesses in order to survive.