You are here: Home › Republican Party Retweets Tweet Asking If Supporters Are Ready To “Give Their Lives” For President Trump 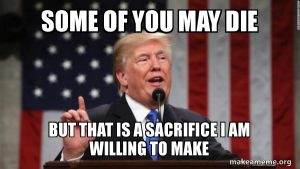 I had difficulty believing this when I saw it, for while not unknown to historical patterns, the claim that the GOP, or even the Democrats, would ask for their party members to ‘die’ for ‘their president’ is strange. Yet here it is, 2020, and as Mediaite reports, from a tweet by the Arizona GOP, the party did ask if its members were give their lives for the current election fight for trump.

The Arizona Republican Party escalated its rhetoric by urging people to fight to the death on behalf of President Donald Trump’s attempts to dispute the 2020 Election.

The organization, headed by Chairwoman Kelli Ward, had previously raised eyebrows at the end of November when they offered this reaction to the certification of Joe Biden’s victory in the state:

Ward continues to dispute the certification of the results in court, even though Trump’s own legal team has never been able to produce evidence for his claim that the 2020 general election was tampered with by mass voter fraud.

On Tuesday, the Arizona Republican Party cranked things up a few notches when they retweeted “Stop the Steal” advocate Ali Akbar for saying “I am willing to give my life for this fight.”

Let’s recontextualize this for a moment.

Let’s say that a Muslim candidate- assuming he is a Democrat -asked the same question, but to “die for President Biden” or some clear variant of this.

It is quite clear, it seems, that the political right would immediately label the Democrat party as a bunch of Islamic terrorists who want to destroy America.

Likewise, it is doubly ironic that the person making the “die for Trump” statement is Ali Akbar, who goes by the name of Ali Alexander and has made a name for himself in supporting Trump and right-wing politics. While I cannot definitively confirm it, I can say that “Ali Akbar” is not a name I have ever seen given to Christians, but only to Muslims, and with an inclination towards the Shiite sect (since “Ali Akbar” literally means “Ali is greater”, and Ali is the progenitor of the Shia sect due to his feud wit Abu Sufyan after Uthman’s murder). Indeed, it would be a level of unprecedented irony- assuming that clear proof in the future can be ascertained as if this person indeed was or is a Muslim (which is not explicitly clear yet)-to have a GOP that for years vilified Islam only to back a Muslim saying that people should ‘die for Trump’.

Now I don’t support Islam- for moral reasons. Likewise, I do not wish to play party favorites. That said, how else does one expect to interpret such a tweet, no matter what the side was who said it?

But this story is a lot bigger than just one tweet from the Arizona GOP. This speaks to the trend, that Shoebat.com has been talking about for a while, of the growing radicalization of political discourse and the unreasonable and violent trajectory it is taking. Instead of having a religion, politics has become a replacement for religion, and with that, the support of political parties akin to a modern tribalism. This is why it is not a surprise that nationalism, tribalism, and militarism follow on the same trajectory, as they are interlinked with each other.

The political right is not different from the political left save for the emphases they use to turn the proverbial “wheel” of revolution for their gain at the loss of the many. The fight for control over the “wheel” is exacerbated by the crumbling of the American empire, and thus a likely violent future likely awaits not just foreign nations, but also possibly domestic US politics.

The escalated rhetoric began in the 1990s, but exploded open with the Trump presidency and his ‘brash’ approach to the political left in his speeches. Now, the left is applying the same techniques in speech to the right. However, be very careful, for as some in the political left have shown a willingness to engage in violence, arson, and looting, and been allowed to do this, it is only time before the political right begins to do the same types of things, and possibly even, as this tweet alludes to, to see people die for their particular party.

In other words, play the Horst Wessel Lied, because it is the 1930s all over again.